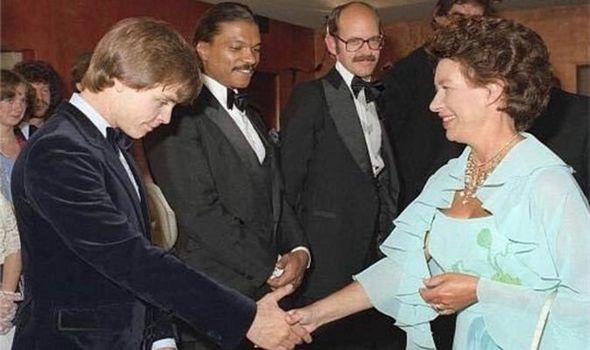 Mark Hamill has sent social media into overdrive with a throwback picture of him meeting Princess Margaret in London while promoting Star Wars sequel, The Empire Strikes Back. Hamill, then 29, says that Billy Dee pranked him with a hilarious piece of protocol advice moments before the royal encounter.

As a result, Hamill looked directly at the floor when he shook hands with Princess Margaret with the awkward moment caught on camera.

Hamill uploaded the vintage photo yesterday and captioned it: “This photo was taken moments after Billy Dee informed me that direct eye contact with royalty was punishable by prison and/or beheading (note Billy’s sly enjoyment of his prank, as Frank Oz looks on).

Frank Oz, who played Yoda in the franchise, hilariously replied: “Ohh! I always wondered why you did that. I just thought you were checking out her shoes.”

Another user said: “This is why I am on Twitter, for this kind of thing. It’s like a diamond in the rough, a rose among thorns, an M&M in the trail mix.”

One man replied: “As usual Mark Hamill wins Twitter for another day… Hahaha!!! Thank you for the laugh Master Skywalker, I needed that!”

A third added: “You were just a gullible lad. Adorable.”

Despite the encounter, the event was not the last time Hamill would meet royalty.

In 1997, he was snapped sharing a joke with Prince Charles at the Star Wars: Special Edition premiere.

And in 2016, it was revealed Hamill spent time with Prince Harry and Prince William on the set of Star Wars: The Last Jedi.

Hamill tweeted a photograph of them together days after Archie was born and claimed he had a hand in choosing his name.

He said: “Here’s me with William and Harry pitching the idea of naming any future royal baby after their favourite Star Wars actor.

“Happy they chose Archie HARRISON Mountbatten-Windsor but regret not being more specific. Should have pitched favourite Star Wars actor WHO PLAYED LUKE.”