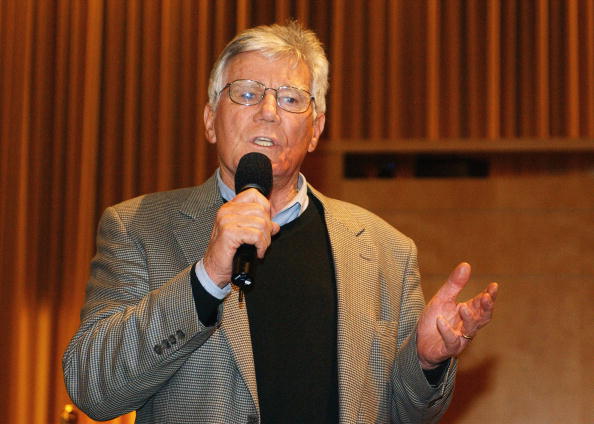 Mitchell Ryan has died at the age of 88, his agent has confirmed.

His step-daughter told the Hollywood Reporter that he died from congestive heart failure at his home in LA.

Ryan’s break out role was as ex-convict Burke Devlin in the iconic TV show Dark Shadows.

Kathryn Leigh Scott portrayed his love interest on the TV soap, and led tributes to the actor on social media.

‘He was a great gift in my life. I cherish my warm memories of his beautiful soul. I’m heartbroken.’

Speaking in an interview decades later about his time on Dark Shadows, Ryan said that the show was a ‘wonderfully written Gothic kind of melodrama and Burke was this marvellous, mysterious character.

‘And actually, there wasn’t a whole lot to do with it except bring a lot of my passion to it and just allow it to come out,’ he added.

He also appeared in a range of other TV shows, including All My Children, Murder, She Wrote and Golden Girls.

In the 1990s, he took on a long-running role as Greg’s wealthy and eccentric father on Dharma & Greg.

He also performed in the theatre and on Broadway, including appearances in Wait Until Dark, Medea and The Price.

Ryan opened up about his battle with alcoholism in his 2021 autobiography, Fall Of A Sparrow, discussing his sobriety journey.

He wrote: ‘I’m blessed that, 30 years a drunk, I’ve managed to live a working actor’s life to be envied. And I’ve lived a great deal of real life while I was at it.

‘Sober for the next 30 years, I’m told that I’ve come out of it all a good and useful human being.’

Ryan is survived by his wife Barbara Albertine. He also had three children, and five grandchildren.