Kris Jenner celebrated her 66th birthday with a karaoke party at home, and some fans thought Pete Davidson was in attendance.

Pete Davidson, is that you? The Saturday Night Live cast member could have possibly been in attendance with Kim Kardashian, 41, as she celebrated her mom Kris Jenner‘s 66th birthday. In a video snippet from the family celebration, which was held on Nov. 5, a bleached blonde with short hair could be seen next to the SKIMS founder from behind. While it’s unclear if it was Pete for sure, it certainly looks like it.

In a brief audio clip, a voice that some thought sounded like Pete was heard. After Kim declared she was “done” singing, someone responding replied, “oh, come on’” — perhaps the 27-year-old comedian. Others suggested that the blonde was family friend Ellen DeGeneres, who is particularly close to Kris.

At the very least, Pete has interacted with Kim’s older sister Kourtney Kardashian, 42: the Poosh founder joined Pete and Kim on last weekend’s outing to Knott’s Berry Farm in Buena Park. The New York native is already a friend of Kourt’s fiancé Travis Barker, 45. Kim and Pete appeared totally comfortable with Kourtney and Travis, as they held hands with them present on a roller coaster and in the park. 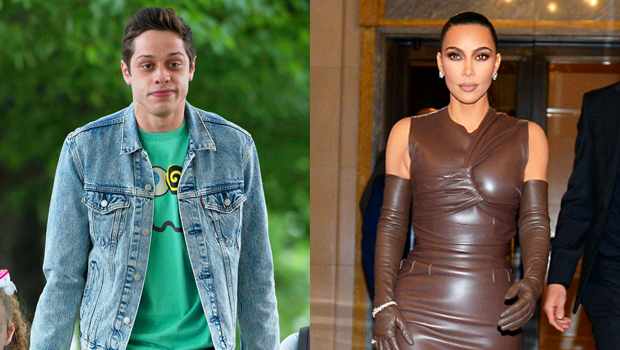 Since their California hangout, the duo haven’t slowed down the momentum with back-to-back dates in New York City! Pete treated the Keeping Up With The Kardashians star to dinner at Staten Island’s Campania on Nov. 2 where they also showed some PDA. “They were holding hands above the table and were mostly left alone throughout the time they were there,” a source told HollywoodLife EXCLUSIVELY, adding, “it was without a question a date.”

Just a day later, the pair stepped out again for dinner at exclusive members-only club Zero Bond. The location could have been were the unexpected romance began brewing: the club is where SNL hosted an afterparty following Kim’s successful hosting debut on Oct. 9. On the episode, the KKW Beauty founder and Pete shared an on-screen kiss during an Aladdin inspired sketch where they played Princess Jasmine and Aladdin!