Kate Garraway’s husband Derek Draper has been critically ill in intensive care for 10 weeks, after contracting coronavirus. The Good Morning Britain host has now said she has been told to prepare for her “second worst case scenario”.

People had said to me before that they thought he was going to die, but not that he might stay in this state

The 53-year-old’s spouse, 52, was put into an induced coma in early April.

Medical professionals have been trying to bring him out for the past three weeks, after he was previously brought back to life once after his heart stopped.

Speaking in a new interview with The Sun, Kate addressed the “terrible” moment she was told he may “never change”.

The mother-of-two said she was immediately sick, as it sunk in her other half could be “lost”. 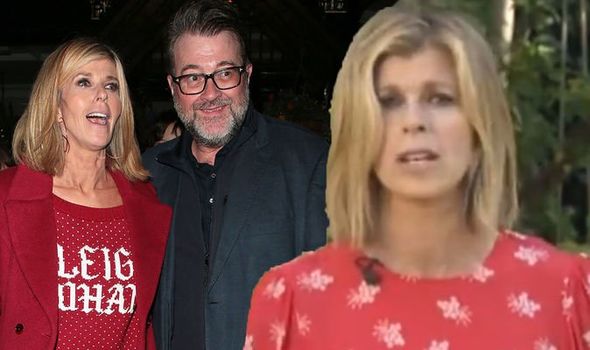 The star commented: “There was a terrible phone call two weeks ago from a senior doctor in the intensive care unit.”

She was asked what her greatest fear was, explaining it was Derek dying.

“He replied, ‘Well, now I think I have to give you a second worst case scenario, which is that he never changes from this. That he is locked in this for ever’,” she continued.

“I threw up, there and then. People had said to me before that they thought he was going to die, but not that he might stay in this state.”

Kate went on: “It’s like a second level of loss. We may lose him even if we don’t lose him. If he doesn’t wake up, then he’s sort of lost anyway… not that I’d love him any less or ever give up.

“I’d fly all over the world to find a cure if there was one, but all this is unprecedented.”

She revealed how Derek’s body has been effected by his battle with COVID-19, after he was hospitalised with breathing difficulties on March 30.

The small screen favourite said he has clots on his lungs, holes in his heart, that his liver and pancreas has been “impacted” and he is now “very diabetic”.

Kate got a glimmer of hope just before her birthday on May 4, when Derek opened his eyes for the first time.

She added: “That was an amazing day… But then he closed them.

“Although he still opens them periodically, there’s no sense of whether he’s actually seeing anything.”

Meanwhile, it comes just hours after she returned to TV in an interview with pal Ben Shephard on GMB.

The 45-year-old later addressed their moving chat, in which she confirmed Derek no longer had coronavirus.

Taking to Twitter, Ben offered some heartwarming words as he reposted a clip from their video call.

In view of his 745,000 followers, he penned: “I’m not sure what the right words are so simply thank you for all your messages of support and love to Kate, Derek and the kids it means so much.”

Good Morning Britain continues Monday at 6am on ITV.