“This trial is about more than just our freedom,” declares Letitia Wright’s Altheia Jones-LeCointe to the unsteady Shaun Parkes-portrayed Frank Crichlow in Small Axe: Mangrove.

“What is being called into question in this case is the right of anybody, not just Black people, but the right of anybody to demonstrate,” the Black Panther leader (party, not the Marvel movie) says to the Notting Hill restaurant owner as they and the seven other defendants in the Mangrove Nine challenge the prejudices of British justice in the early 1970s-set Steve McQueen miniseries from Amazon. “So I’m not here just defending myself, but trying to defend us all”

Amidst an adroit depiction of the torturous real-life landmark UK discrimination case that turned a bright light on violent police harassment surrounding Crichlow’s joint and the neighborhood, Mangrove was not only directed by the 12 Years a Slave helmer, but also written by him in collaboration with Alastair Siddons. Read the Mangrove script below.

Today’s look at one of my Top 10 best shows of 2020 is the latest installment of Deadline’s It Starts On the Page, a series that highlights the scripts serving as the creative backbone of the TV awards season. Published on the site over the past few weeks, the scripts have been submitted for Emmy consideration this year and selected using criteria that includes critical acclaim, a range of networks and platforms, and a mix of established and lesser-known shows.

Setting place, tone and time, the London-based Mangrove was the first episode in the five films that make up the Small Axe anthology. Dropping weekly, the stunning series focusing on the legacy of the Windrush Generation and the battles of London’s West Indian community against institutional racism was released on the streamer starting on November 20, 2020 – five days after Small Axe appeared on the BBC in the UK.

Perhaps landing with an even greater poignancy after the cultural social and political firestorm that was 2020, McQueen and Siddons’ Mangrove crafts an awakening in its depiction of British history too often hidden now unleashed.

So, if you didn’t see the miniseries with a title from a Bob Marley classic, then check out the Mangrove script and start bingeing now on Amazon. 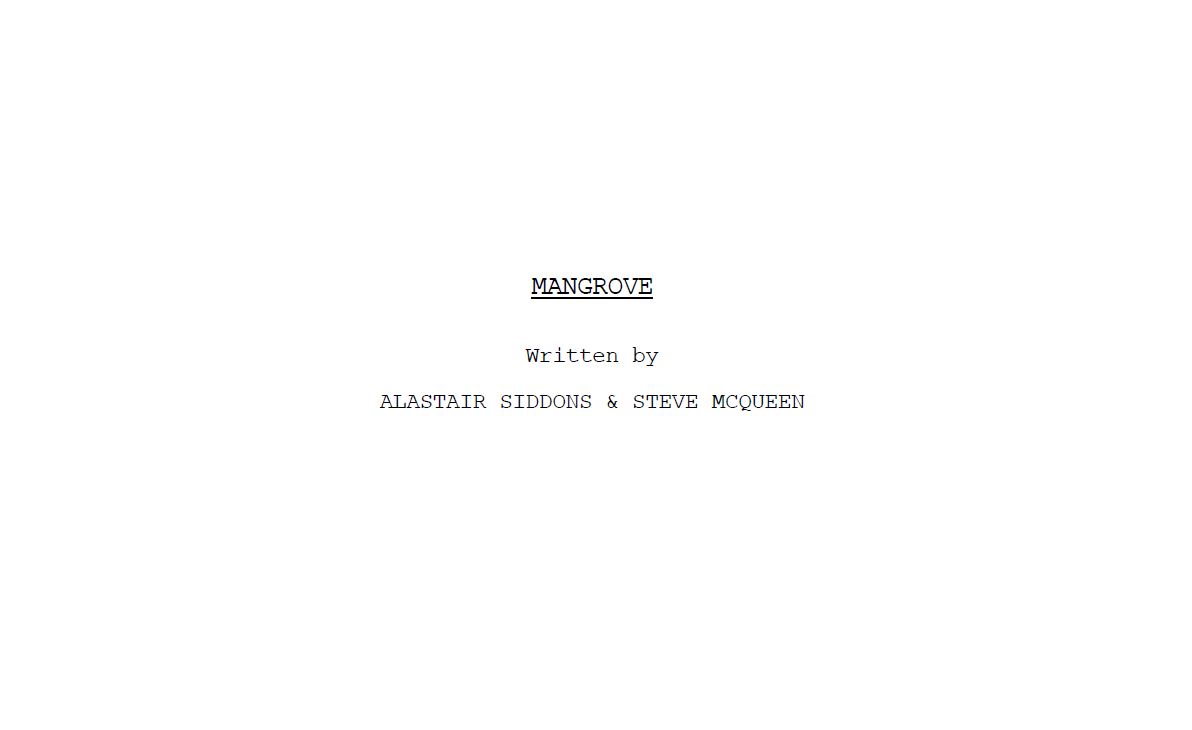 It Starts On The Page

It Starts On The Page: Read A Season 2 ‘The Boys’ Script By Anslem Richardson

It Starts On The Page: Read ‘The Underground Railroad’ Finale Script By Barry Jenkins & Jacqueline Hoyt

It Starts On The Page: Read A Neil Cross Script for Season 1 Of ‘The Mosquito Coast’