Robert Pattinson can always be counted on to offer some interesting insights into his life during interviews, and in a recent GQ profile the actor explained why he’s ghosting his trainer for the The Batman, and he also offered an in-depth idea for a restaurant that serves handheld pasta (yes, he’s serious).

The profile also included a throwaway line about Pattinson’s girlfriend—”He’s in London with his girlfriend, in the apartment the Batman folks rented for him”—leading fans to wonder just who the actor is currently dating. Here’s what we know.

Who Is Robert Pattinson’s Girlfriend?

Robert Pattinson is currently dating Suki Waterhouse. The couple have been together since 2018, when US Weekly reported that they went out for a date in London. A source also told the outlet that Pattinson and Waterhouse “have known each other and been around each other for a long time. [They] definitely have a love of music in common and they’re both really cool, nice and normal people and fun-loving.”

Waterhouse is an English model and actress, and she’s appeared in movies including The Divergent Series: Insurgent, Assassination Nation, Billionaire Boys Club, and Detective Pikachu. There aren’t many pictures of the two together, but they did attend the Dior Perfume Dinner during Paris Fashion Week this past January. 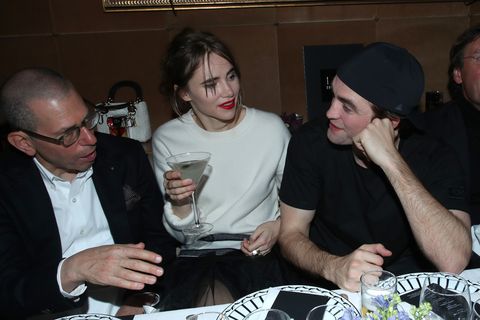 In 2019, Pattinson told The Sunday Times why he prefers to keep his relationships private:

“If you let people in, it devalues what love is. If a stranger on the street asked you about your relationship, you’d think it extremely rude. If you put up a wall it ends up better. I can’t understand how someone can walk down the street holding hands, and it’s the same as when I do it and a hundred people are taking your photo. The line between when you’re performing and when you’re not will eventually get washed away and you’ll go completely mad.”