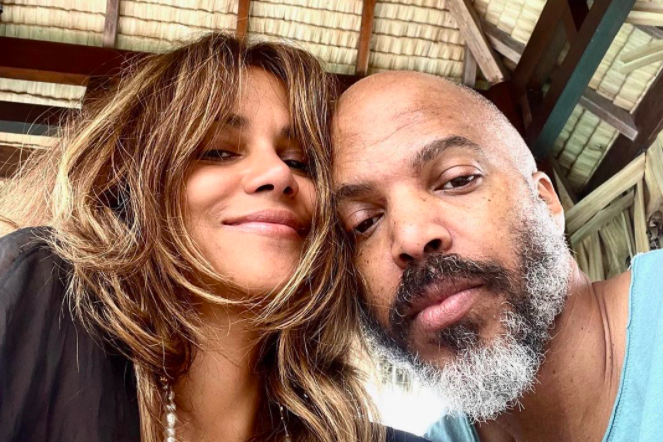 Halle Berry has insisted she was ‘just having fun’ posting a shot in a chapel alongside boyfriend Van Hunt, which clearly sent the internet into meltdown.

The star was forced to deny the pair had eloped after she posted a snap of the pair kissing and holding hands, with the former Bond girl donning a floral crown while on a romantic getaway.

Getting cheeky with her caption, Halle wrote: ‘well…IT’S OFFICIAL! (sic)’, which, naturally, led to an influx of comments from well-wishers.

Sadly, what a lot of people didn’t realise was that there was another slide to gaze upon, and that there was a second selfie of the pair on New Year’s Day with the caption: ‘It’s 2022!’

As followers got themselves into all sorts of celebratory tizzes, Halle clarified that they were just messing around…though they appreciated the touching comments.

She added in a new post: ‘We were just having some New Year’s Day fun!

‘People clearly don’t swipe as much as we thought they did. Thank you for the well wishes, tho’, it really touched our hearts.

‘Now it’s OFFICIAL, the internet is no longer undefeated.’

She added the appropriate tags nomoreswipes4me and Januaryfoolsday, to really bring the message home.

This gotcha provided many a giggle for those who thought the pair wed, with Octavia Spencer – who had earlier congratulated the pair – laughing: ‘Omgggggg. I am people!!!!!! So funny.’

Halle and Van first announced their relationship on Instagram in September 2020, when the Academy Award-winning actress shared a picture of herself donning a T-shirt with the musician’s name emblazoned across it.

The Bruised director – who has daughter Nahla, 13, with former boyfriend Gabriel Aubry and son Maceo, eight, from her marriage to third husband Olivier Martinez – recently gushed that she feels good because her fans are so supportive of her relationship with the singer.

She said: ‘Aw, that makes me feel good. You know, I think a lot of my [fans], the public, has gone on this journey with me. Whether I liked it or not, my stuff’s been all out in the world.

‘And so it’s nice not having people follow the splits and just being happy.’

And Halle previously admitted she feels more ‘fulfilled’ in her life now than ever before, and is happy in all areas.

She told Women’s Health: ‘I just feel fulfilled. I feel happy in my life romantically, as a mother, as an artist.

‘I’m a much better mother in this circumstance than I would have been had I stayed in a romantic relationship that didn’t serve me and didn’t make me feel the way I need to feel as a woman.’