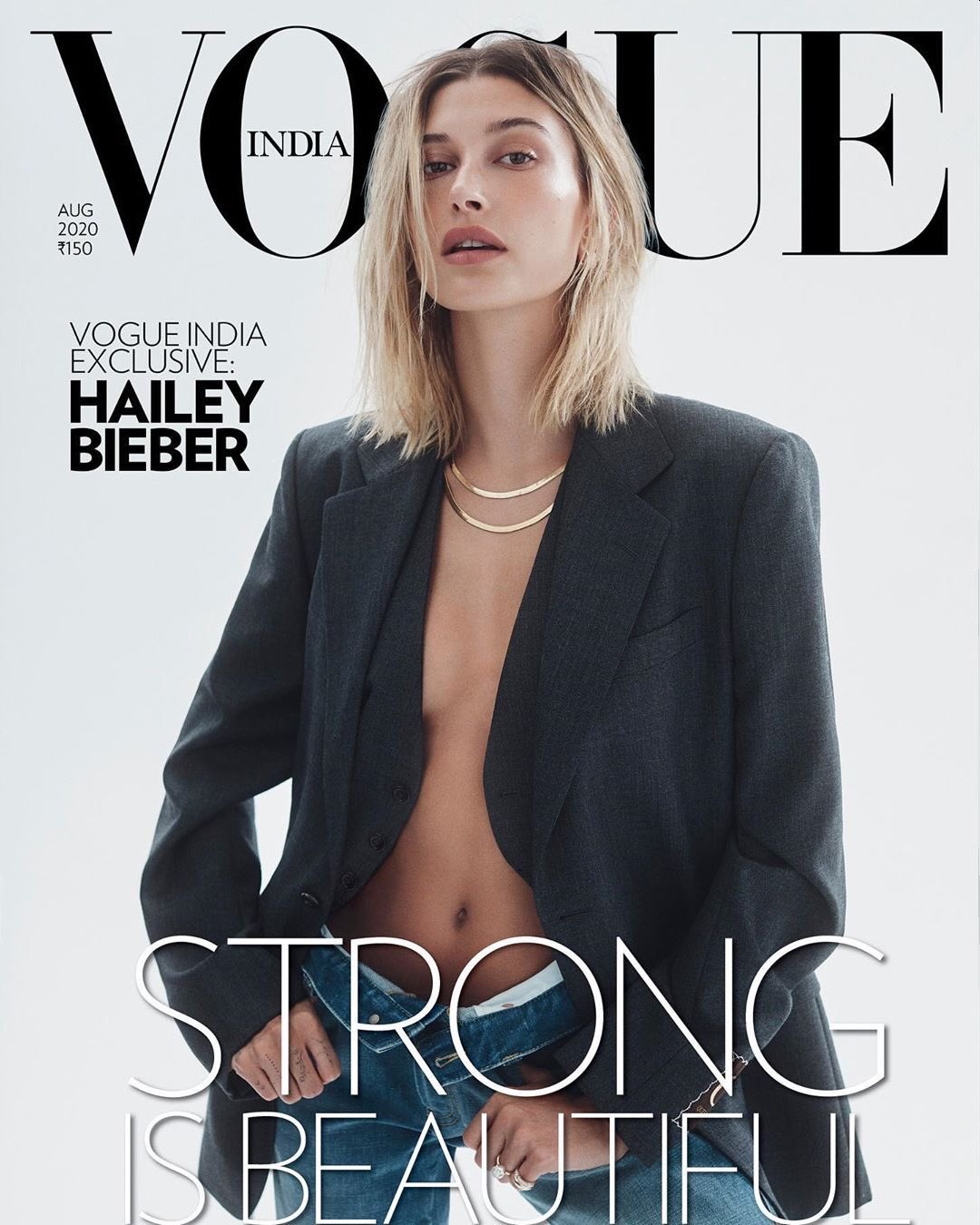 Hailey Bieber covers the latest issue of Vogue India, although this is so basic and bland, it could have been a cover for any North American or European Vogue edition. They were probably limited with what they could shoot and with which clothes, so what we got was Hailey in blue jeans and a blazer. I’ve said before that I find Hailey more compelling as a model once she got with Justin Bieber, and I still sort of feel that way? She actually is a really pretty woman and she photographs well. The fact that she’s married to Justin Bieber adds a dimension of interest and there’s no shame in that. Hailey chatted with Vogue India about race, fame and style – you can read the full piece here. Some highlights:

On Black Lives Matter: “It was time to look inside and reflect: what do I not know, what do I need to ask, how can I step up and do the best that I can to be an ally in the Black Lives Matter movement?” she asks, adamant that her future children will have it differently. “They will be raised knowing how to treat people, why we don’t say certain things, and why we respect and acknowledge and give credit where credit is due.”

Growing up as Stephen Baldwin’s daughter: “To be honest, I don’t really think I was ever famous. Of course, I knew my father was an actor and he was famous to an extent, but if I was to compare how I grew up to how Justin did, he’s had a way crazier ‘famous’ experience really young. Whereas I got to grow up and get my driver’s licence and really be normal until the past three years of my life.”

She’s wearing more men’s clothing these days: “I’ve never really been someone who finds an item in the men’s section and says, ‘Oh I’m not going to buy this because it’s menswear.’ I wear a lot of men’s suiting and love mixing men’s silhouettes like big, boxy jackets and baggy pants into my style.”

Her mom is Brazilian: “My mother is Brazilian and I grew up in a house where she and my grandmother only used organic products, from hair dyes to cleaning products. I’ve been surrounded by natural and clean beauty my whole life. There are these images online, photographs of Ipanema beach in the 1970s, where beautiful and carefree Brazilian women in colourful bathing suits are enjoying the sun. I look at them and I see sporty, healthy, fit and fun women, and it’s all I ever want to be.”

I agree that she wasn’t really famous until she started up with Bieber. She was just sort of a nepotism also-ran model, picking up jobs that Kendall Jenner didn’t want. Now look at her. I also always forget that she’s half-Brazilian! What else… when I was a lot younger, I used to love menswear because it’s usually better made than women’s clothing. But at some point, I just began to appreciate clothes made for a woman’s body. Still, if I had Hailey’s figure, I’d probably try more menswear too, because she can wear anything (I’m not even joking).

New @danielwellington featuring the Iconic Link Lumine ❤️ With Swarovski® crystals and a two-toned bracelet, this watch becomes the ultimate statement piece for THE occasion. Get yours now and glam up every outfit.​ #IconicLinkLumine #danielwellington

New @danielwellington featuring the Iconic Link Lumine ❤️ With Swarovski® crystals and a two-toned bracelet, this watch becomes the ultimate statement piece for THE occasion. Get yours now and glam up every outfit.​ #IconicLinkLumine #danielwellington