Gigi Hadid has been active on social media throughout the coronavirus pandemic and especially after she confirmed she is expecting her first child with her boyfriend Zayn Malik this September. But the model and her family have rarely shared shots of Gigi on the Pennsylvania farm where she is quarantining with her mom Yolanda Hadid and sister Bella Hadid. Yesterday, her dad Mohamed Hadid made an exception. He posted a photo of Gigi with her sister Bella, brother Anwar, Anwar’s girlfriend Dua Lipa, and their friend Leah McCarthy. Mohamed placed a fairy emoji over Gigi’s body to protect her privacy during her pregnancy.

The rare glimpse of Gigi comes just days after she responded to reports on Twitter that she was trying to “disguise” her pregnancy.

Gigi had responded to a fan in the comments of an Instagram Live she did in late June. The fan marveled over Gigi being able to hide her pregnant stomach six months in. “This angle and the really baggy jumpsuit make for an optical illusion,” Gigi wrote with a laughing emoji. “From the side it’s a different story! haha—wishing u the best! x”

When British Vogue ran that remark as Gigi explaining how she has disguised her pregnancy, Gigi clarified her stance.

“Disguise ….? 🤨” she tweeted, with a raised eyebrow emoji. “I said in a baggy jumpsuit the front and side views are visually different stories—not that that was intentional or I was trying to hide anything. Will be proud and happy to share ‘insight’ when I feel like it, thanks.”

She added, “For now I am proudly experiencing and sharing this time with my family and loved ones.”

The last glimpse of Gigi that her parents shared came back in May when her mother Yolanda posted a photo of Gigi working on the farm. 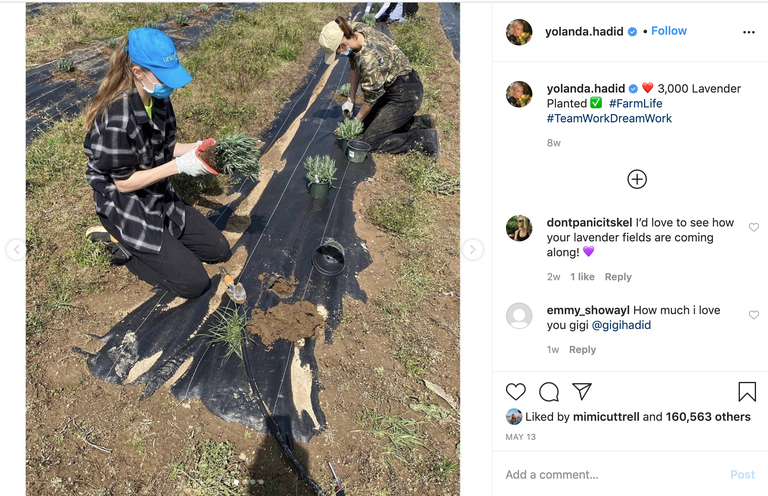