EDEN CONFIDENTIAL: Holidays go with a swing for Jodie Kidd and her hunky beau

Jodie Kidd has not yet announced a date for her wedding, but she’s clearly ready to get into the swing of married life.

The model and TV personality, 43, couldn’t resist a go on a rope swing as she enjoyed a holiday in Barbados with fiance, ex-Royal Marine Joseph Bates.

‘It’s so good to get sand between the toes again,’ she says. ‘Feeling very lucky and full of gratitude.’ 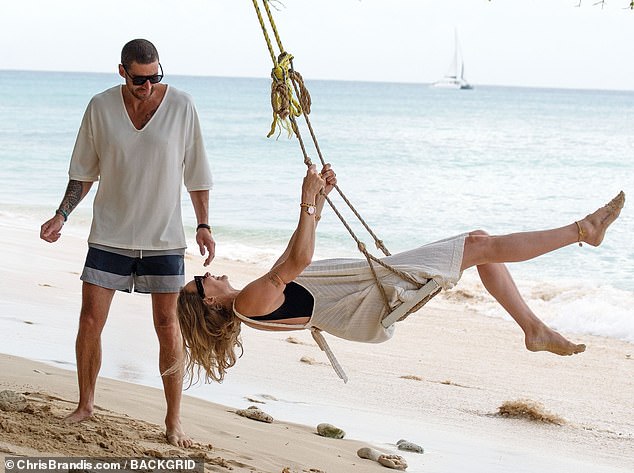 Jodie Kidd has not yet announced a date for her wedding, but she’s clearly ready to get into the swing of married life 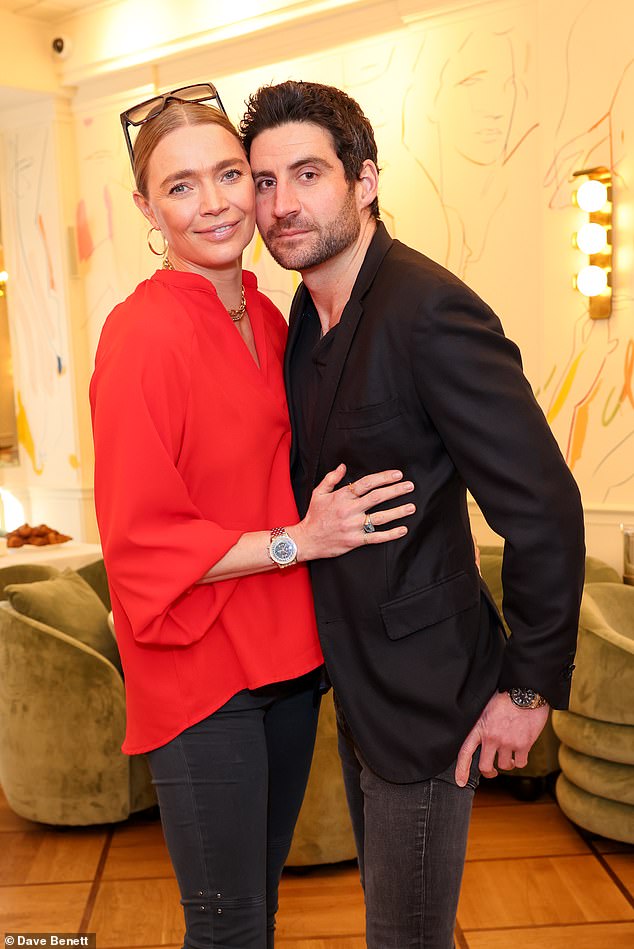 The model and TV personality, 43, couldn’t resist a go on a rope swing as she enjoyed a holiday in Barbados with fiance, ex-Royal Marine Joseph Bates

Bates, 35, proposed to Jodie, the great-granddaughter of Canadian press baron the 1st Lord Beaverbrook, in Paris last December after a four-year courtship. She split from her last husband, David Blakeley, in 2015 after just four months of marriage.

Jodie, who runs The Half Moon inn in Kirdford, West Sussex, has a ten-year-old son, Indio, with Argentinian polo player Andrea Vianini.

Attenshun! Now Kate is ready for her Army call-up

She’s the only senior royal who doesn’t have a connection with the military, but now the Duchess of Cambridge is to become a recruit.

I can disclose that Catherine is being lined up to stand in for the Queen at the Sovereign’s Parade at the Royal Military Academy Sandhurst. ‘It’s being seriously considered,’ a senior royal source confirms.

Catherine taking the salute at one of the two remaining passing-out parades this year would be a fitting tribute for the Queen’s Platinum Jubilee, and would have personal significance for the Duchess, as Prince William graduated from the celebrated military academy as an officer in 2006.

The Queen, who is head of the Armed Forces, took that parade, and the Duchess attended as William’s then girlfriend. According to a lip reader, she said of his dark blue uniform, white buckled belt and red sash: ‘I love the uniform. It’s so sexy.’

Prince Charles and the Duchess of Cornwall also attended the event. The Sandhurst role would be a strong indication that Catherine will soon be handed an honorary military role, such as colonel-in-chief of a regiment. The Queen is involved in selecting colonels. 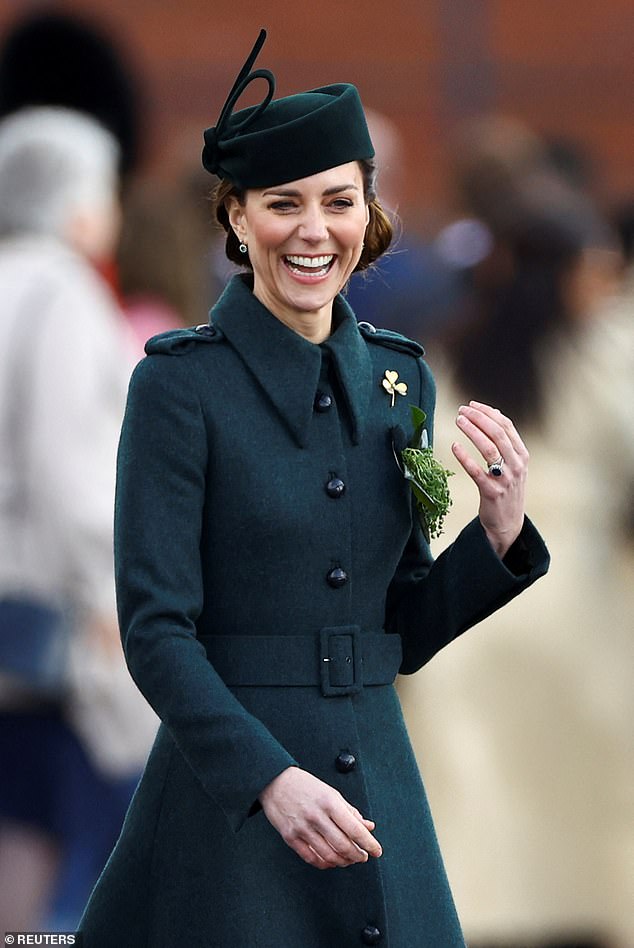 She’s the only senior royal who doesn’t have a connection with the military, but now the Duchess of Cambridge is to become a recruit

Catherine is tipped to be the next Colonel of the Grenadier Guards, replacing the disgraced Prince Andrew, who was stripped of his military titles. The Duchess, 40, would be the first female colonel in the regiment’s 366- year history.

She has attended military functions with Prince William, who is Colonel of the Irish Guards, and she accompanies him to medal parades and regimental events for the Irish Guards, handing out traditional St Patrick’s Day shamrocks (pictured).

She has also taken the salute at the Household Division’s Beating Retreat on Horse Guards Parade in London. Many members of the Royal Family have military experience, but it’s not required to be appointed colonel of a regiment.

The royal colonel will typically be present at medal parades, events in the presence of the Queen and regimental gatherings, dinners and galas.

Prince Charles is such an admirer of his sister-in-law Annabel Elliot’s talents as an interior designer that his Duchy of Cornwall handed her firm a total of £72,572 in a year for her work on its holiday accommodation.

Sadly, his patronage hasn’t prevented Annabel Elliot Ltd suffering a substantial dip over the past year.

Luvvies are known for their hugs and air kisses, but the theatre world is braced for violence on its big night on June 12.

Organisers of the Tony Awards in New York have sent a letter to guests making it clear that there must be no repeat performance of Will Smith’s slap of Oscars host Chris Rock at last month’s Oscars ceremony.

‘The Tony Awards has a strict no-violence policy,’ declares the missive, adding: ‘In the event of an incident, the perpetrator will be removed from the show immediately.’

Sadie Frost is keen to prove that Kate Moss, her fellow former head girl of the louche Primrose Hill set in the 1990s, is not the only one with a model daughter.

The actress, 56, joined her girl, Iris Law, at a cinema screening in London. Burberry model Iris, 21, whose father is The Talented Mr Ripley star Jude Law, showed her support for clean living by wearing a Purell hand sanitiser printed T-shirt.

She shaved her hair and dyed her brunette locks platinum blonde last year, explaining: ‘The thing I’ve inherited from my family is the ability to try new things and not be scared.’ 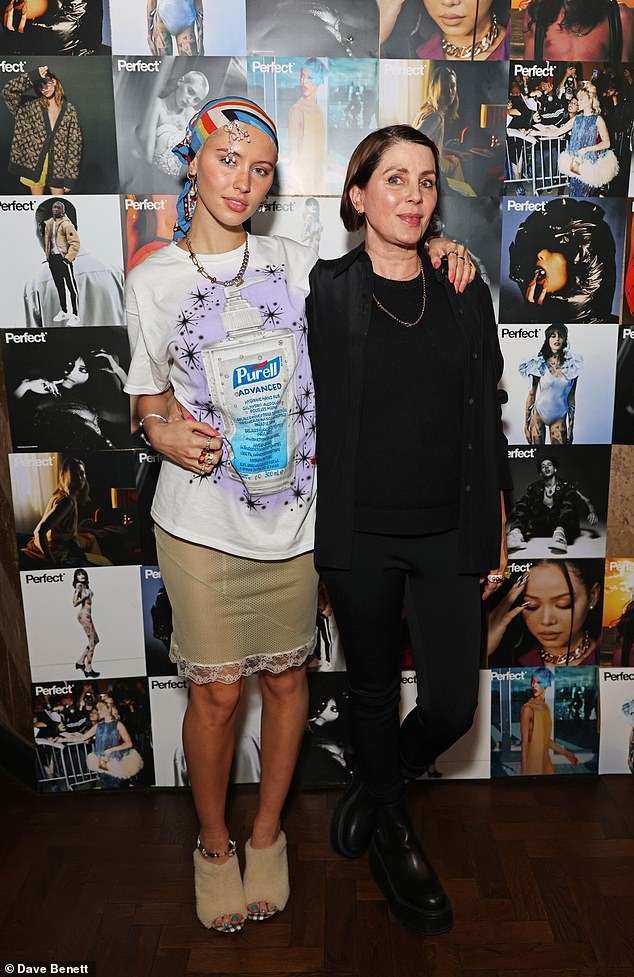 Sadie Frost is keen to prove that Kate Moss, her fellow former head girl of the louche Primrose Hill set in the 1990s, is not the only one with a model daughter

‘I think of our fans like layers of plywood in that we seem to grow another layer each year,’ he says. ‘Eventually, you end up with a table ten feet thick.’

James Bond star Naomie Harris was keen to flaunt her ‘green’ credentials as she stepped out in New York this week.

The Londoner, 45, who played Moneypenny in No Time To Die, wore a bright green top as she voiced her worries about the environment while promoting her new television drama, The Man Who Fell To Earth. 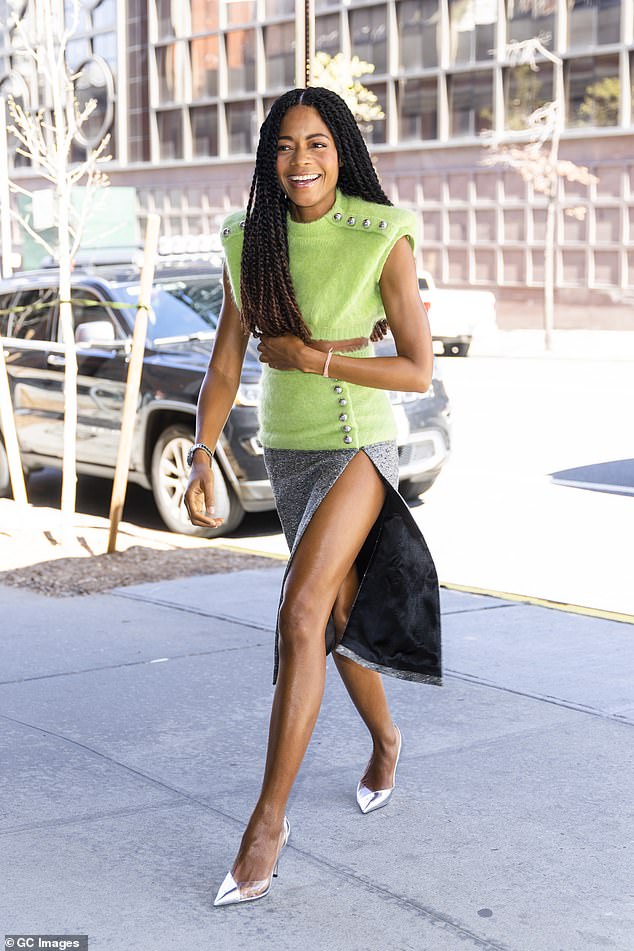 The fashion designer’s daughter transformed the role of Moneypenny from M’s blushing secretary to an active MI6 field agent alongside Daniel Craig’s 007.