Disneyland just opened the flood gates to Downtown Disney — something many employees there are uncomfortable with at minimum … and deathly afraid of at worst.

TMZ spoke to a couple different union honchos who have hundreds to thousands of members working for the Mouse House during normal times — and they told us their rank and file don’t feel safe, and won’t until some crucial demands are met. 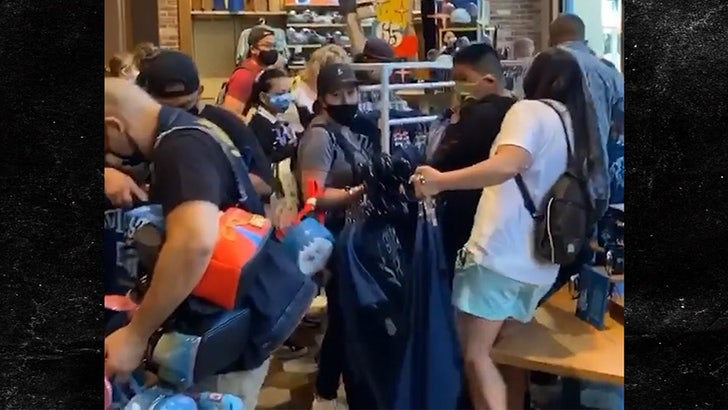 If you haven’t seen some of the videos of the scene, there was virtually NO social distancing being enforced whatsoever in any number of stores that reopened. One positive … most folks were wearing masks, but shoppers were running amok, ignoring signs calling for social distancing.

Andrea tells us this seemingly uncontrollable flood of visitors — from all over the country — worries cast members, who say it’s next to impossible to control the crowds. She says UFCW 324 has been asking for mandatory testing of employees, but Disney ain’t budging.

As a result, she says she thinks the place is a breeding ground for disease, and hopes Gov. Gavin Newsom makes them close shop entirely.

In fact, under Newsom’s new order issued Monday … indoor malls and dining will have to close, but restaurants with outdoor seating — which is most in DD — can remain open.

Austin Lynch, the Organizing Director of UNITE HERE Local 11 says the Downtown Disney reopening is a sign of how badly Disney’s running the show so far.

Most of his 3,000 union members serve food in the park’s hotels and cafeterias, and he too wants guaranteed testing for them before the theme park reopens … whenever that happens.

A Disneyland official tells us, “To date, 20 union affiliates have signed agreements that include health and safety measures such as additional sick pay, reduced park capacity and face coverings for guests and cast members, allowing us to responsibly bring back our cast as soon as possible.”

As for testing, Disney sent a letter to all of its unions last month saying “COVID-19 testing is not viable as a screening tool” and instead urged cast members to continue hand washing, using face coverings and distancing.

In that same letter, though, Disney bragged this approach allowed it to successfully reopen parks in Shanghai and Hong Kong. ICYMI … Hong Kong Disneyland is re-closing due to a surge of coronavirus cases.