We have some BIG news for Sex and the City fans!

Last week we heard Mr. Big would be going the way of the Samantha as Chris Noth was the latest star of the original series who would not be returning for the revival series on HBO Max.

But rumors of Big’s departure may have been premature — at least according to a little source named Chris Noth. The Law And Order star took to Instagram on Sunday for the first time since the news dropped. He just wanted to share a pic of a fox he spotted in the snow outside his home — and promptly got responses from all the stans mourning his reported absence on the HBO hit.

Par for the course of social media of course, but the actor — who appeared in all six seasons and both films — actually took the time to respond to a couple fans, subtly suggesting things might not be what they seem!

To a fan who told him Carrie “needs” him and to “please reconsider” turning down a role in the series, as was reported by Page Six, Noth quipped:

“well if page six says it… it must be true

And he got even more explicitly reassuring with another fan who wrote:

“Dear Mr North … why for heaven’s sake you are not playing my beloved Mr Big?? My heart is

Her beloved Mr. Big wrote back:

“Everything changes- including announcements in the rags”

Wow! Hard to believe he’d be this forthcoming with fans if he didn’t know something we don’t… 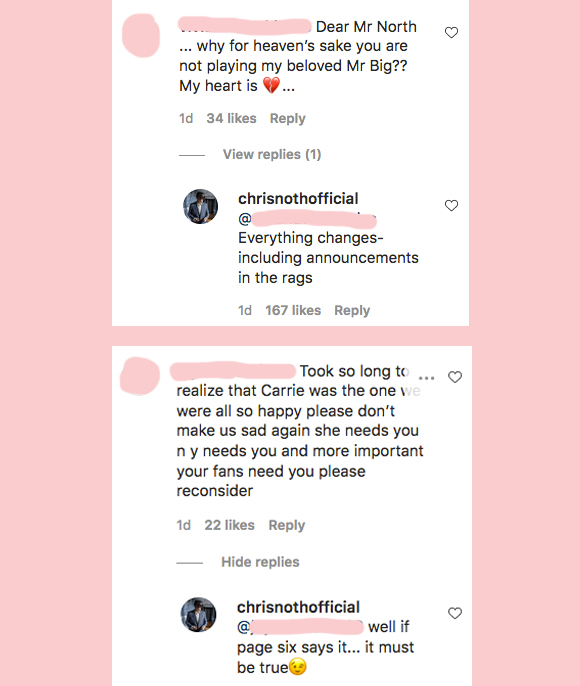 As we previously reported, HBO Max is bringing back the show for a revival series with Sarah Jessica Parker, Kristin Davis, and Cynthia Nixon all reprising the roles that made them household names. SJP confirmed the amazing news last month on her personal IG just last month.

Sadly, as you’ve probably heard, Kim Cattrall will not be returning for the revival. Just as she had no interest in a third feature film, she has made it clear she does not plan on continuing the story of Samantha Jones in any medium.

“I absolutely love Sex and the City and whilst I am saddened that Samantha will not return, I applaud doing what is best for you and think this is great example of putting yourself first. Well done @KimCattrall.”

Considering she had received such vitriol from the fan base for her decision about the third movie, we’re glad she’s seeing it when folks give her respect, too.

Are YOU excited to potentially see Mr. Big again after all??