EXCLUSIVE: Sacha Baron Cohen had no plans to make another Borat movie after the success of 2006’s Borat: Cultural Learnings of America for Make Benefit Glorious Nation of Kazakhstan, which broke the satire mold (and the bank) and made Baron Cohen’s intrepid journalist Borat Sagdiyev far too popular to pull off a sequel.

Then came Donald Trump and everything changed, and with Covid-19 it changed again. The result was Borat Subsequent Moviefilm: Delivery of Prodigious Bribe to American Regime for Make Benefit Once Glorious Nation of Kazakhstan, which the filmmaking team sped to complete and Amazon Studios rushed up ahead of the November 3 U.S. presidential elections.

The Jason Woliner-directed pic made its deadline and has been gaining awards buzz ever since, especially for breakout co-star Maria Balakova who plays Borat’s daughter Tutar. It’s up for three Golden Globes on Sunday.

“This film was conceived the day after the 2018 midterm elections,” Baron Cohen says. “I felt American democracy was in danger, and I felt I couldn’t just be a bystander. I didn’t think for a moment that I could influence the Nov. 3 election. However, I felt like I had to do what I could to dissent.”

That meant some serious acrobatics by the screenwriters — Baron Cohen, Anthony Hines, Dan Swimer, Peter Baynham, Erica Rivinoja, Dan Mazer, Jena Friedman and Lee Kern, working from a story by Baron Cohen, Hines, Swimer, and Nina Pedrad – -who already were uniquely tasked to create a screenplay that in the film’s improv-y style evolves from storyline to story, outline to script, and table read to actual people unknowingly advancing the plot during shooting. “The fact is, you may end up with 30% of what you worked on, and it’ll be rewritten, revised, stuff will be thrown out, and you spend months going in one direction but then the film going another,” says Baynham, a co-screenwriter and executive producer.

The screenwriting team also had to weave Baron Cohen’s urgency to meet the election deadline with storylines that eventually included a global pandemic, and the surprisingly emotional, female-empowerment anchor of movie which is Borat’s relationship with Tutar, a role that has made a star out of Bakalova. 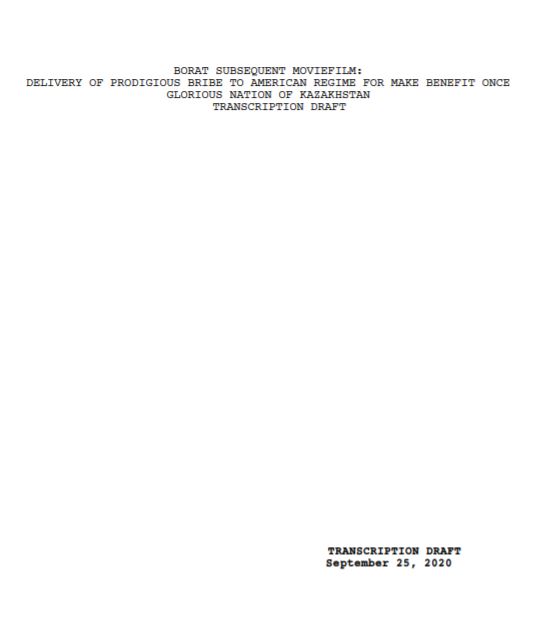 ‘Cherry’: Read The Screenplay For The Indie Drama That Is Close To Home For The Russo Brothers

‘Mank’: Read The Screenplay For David Fincher’s Movie About The Writing Of ‘Citizen Kane’ Penned By His Father