TV BAFTA 2020 winners: Idris Elba thanks the Academy for ‘finally recognising’ him as he leads the night’s champions… while fans note ‘more diversity’ across the ceremony with Naomi Ackie, Mo Gilligan and Romesh Ranganathan also scooping gongs

As one Twitter user put it, the BAFTAs 2020 appeared to ‘catch up with real life’, as diversity appeared much more prominent at Friday night’s awards.

Having been criticised in the past for its lack of BAME [Black, Asian, and Minority Ethnic] winners, the 2020 ceremony seemed to demonstrate progress.

The British Academy of Film and Television came under fire earlier this year, when the BAFTA film awards were criticised for featuring all-white acting nominees and all-male directors. 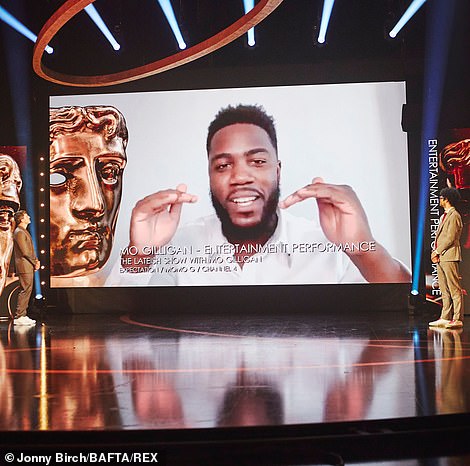 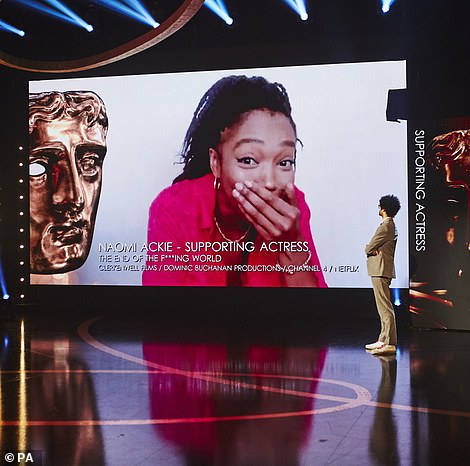 Winning! The TV BAFTAs 2020 were praised for being more diverse with its award recipients as the likes of Mo Gilligan and Naomi Ackie took home gongs

Prince William was one of the prominent voices to comment on the matter at the the time, revealing his anger at the lack of diversity among the 2020 film nominees.

He announced on stage at the event that there would be a ‘full and thorough review of the entire nomination process’ going forward.

It seemed that Prince William – who is president of the Academy – had kept his word, with several viewers tweeting about it.

Idris Elba collected a Special Award, Naomi Ackie took home the Supporting Actress gong for The End Of The F***ing World, Mo Gilligan scooped the Entertainment Award for The Lateish Show, and the Feature trophy was handed to The Misadventures of Romesh Ranganathan.

The nominees also reflected a greater reach also; Gbemisola Ikumelo was nominated for the Female Comedy gong for her role in Famalam and Takehiro Hira the Leading Actor award for Giri/Haji, for instance. 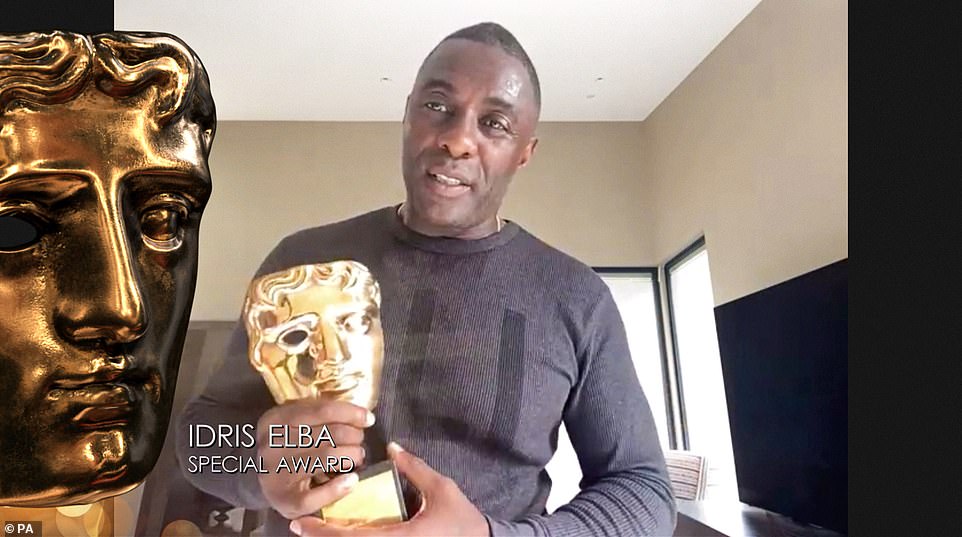 Special Award: Idris Elba was honoured for his exceptional career and his commitment to championing diversity and new talent in the industry

Diversity: As one Twitter user put it, the BAFTAs 2020 appeared to ‘catch up with real life’, as diversity appeared much more prominent at Friday night’s awards

One twitter user lauded the Academy, penning: ‘So good to see some proper diversity in this year’s BAFTAs. At last awards start to catch up with real life! And outstanding recognition for [Idris Elba]!’

Another remarked: ‘So happy to see that @BAFTA has redressed the balance of BAME with their presenters, nominations and winners of the Television BAFTAs.’

Another posted: ‘Really loving the #VirginMediaBAFTAs it is a showcase of the fantastic BAME talent we have in the UK. Well done BAFTA, especially for getting this done during lockdown.’

The Special Award presented to Idris Elba honoured his exceptional career and his commitment to championing diversity and new talent in the industry.

He said in his thank you speech, from home, that his role in a Crimewatch reconstruction in the 1990s was ‘the first rung on the ladder’ for his career, adding: ‘A lot of actors don’t like to admit they did Crimewatch but I’m not embarrassed!’

Following seven wins at this year’s British Academy Television Craft Awards, Chernobyl, the drama based on the nuclear disaster, won two more BAFTAs, for Mini-Series and Leading Actor for Jared Harris. The End Of The F***ing World, a dark comedy drama, also received the BAFTA for Drama Series.

The Leading Actress award was won by Glenda Jackson for her performance in Elizabeth Is Missing, her first television role for more than 25 years and the second BAFTA of her career. Her first BAFTA was for Sunday, Bloody Sunday in 1972.

Will Sharpe won for his performance in Giri/Haji in the Supporting Actor category, while first-time nominee Sian Clifford won in Female Performance in a Comedy Programme for playing Claire, the older sister of the titular character in Fleabag.

The BAFTA for Entertainment Programme was awarded to Strictly Come Dancing, continuing the show’s success following the recent win for the Entertainment Craft Team at the Television Craft Awards.

Race Across the World received the BAFTA for Reality & Constructed Factual. Brain in Gear won the BAFTA for Short Form Programme, with Gbemisola Ikumelo, Fergal Costello and Inez Gordon winning their first BAFTAs.

Ava DuVernay won the second BAFTA of her career with When They See Us, the US crime drama series based on the true story of the Central Park Five, in the International category. It follows her win for 13th, which won Documentary at the 2017 EE British Academy Film Awards, and the honorary BAFTA Britannia Award for Excellence in Directing she received later that year.

News Coverage was awarded to Sky News’ Hong Kong Protests, and the award for Current Affairs was presented to Undercover: Inside China’s Digital Gulag (Exposure).

Virgin Media’s Must-See Moment, the only award voted for by the public, was won by Gavin and Stacey for the iconic moment when Nessa proposes to Smithy.

The Hunt For Jihadi John

Lee Mack for Would I Lie To You

Our Dementia Choir with Vicky McClure

The Misadventures of Romesh Ranganathan – WINNER

Joe Lycett’s Got Your Back

FEMALE PERFORMANCE IN A COMEDY PROGRAMME

When They See Us – WINNER

Stephen Graham for The Virtues

Callum Turner for The Capture

Samantha Morton for I Am Kirsty

MALE PERFORMANCE IN A COMEDY PROGRAMME

Victoria Derbyshire: Men who lost loved ones to knife crime

Race Across The World – WINNER

David Harewood: Psychosis and Me

The Left Behind – WINNER

8 Days: To The Moon and Back

Joe Absolom for A Confession

Josh O’Connor for The Crown

Will Sharpe for Giri/Haji – WINNER

Helen Behan for The Virtues

Helena Bonham Carter for The Crown

Naomi Ackie for The End of the F***ing World – WINNER

VIRGIN MEDIA’S MUST-SEE MOMENT (voted for by the public)