When offering a look at her cleavage post-giving birth to her first child with husband Christopher French, the Sharpay Evans depicter in ‘High School Musical’ film series admits that ‘life is funny.’

AceShowbiz –Ashley Tisdale has learned how funny life can be. One year after undergoing surgery to have her breast implants removed, the Sharpay Evans depicter in “High School Musical” film series showed off her “natural boobs” in a reflective social media post.

On Monday, May 31, the 35-year-old actress took to Instagram Story to share a selfie that put her cleavage on full display. Over the snap capturing her in a gray plunging tank top, she wrote a caption that read, “Got my implants taken out a year ago, got pregnant and now have natural boobs.” Along with a laughing crying emoji, she added, “Life is funny.” 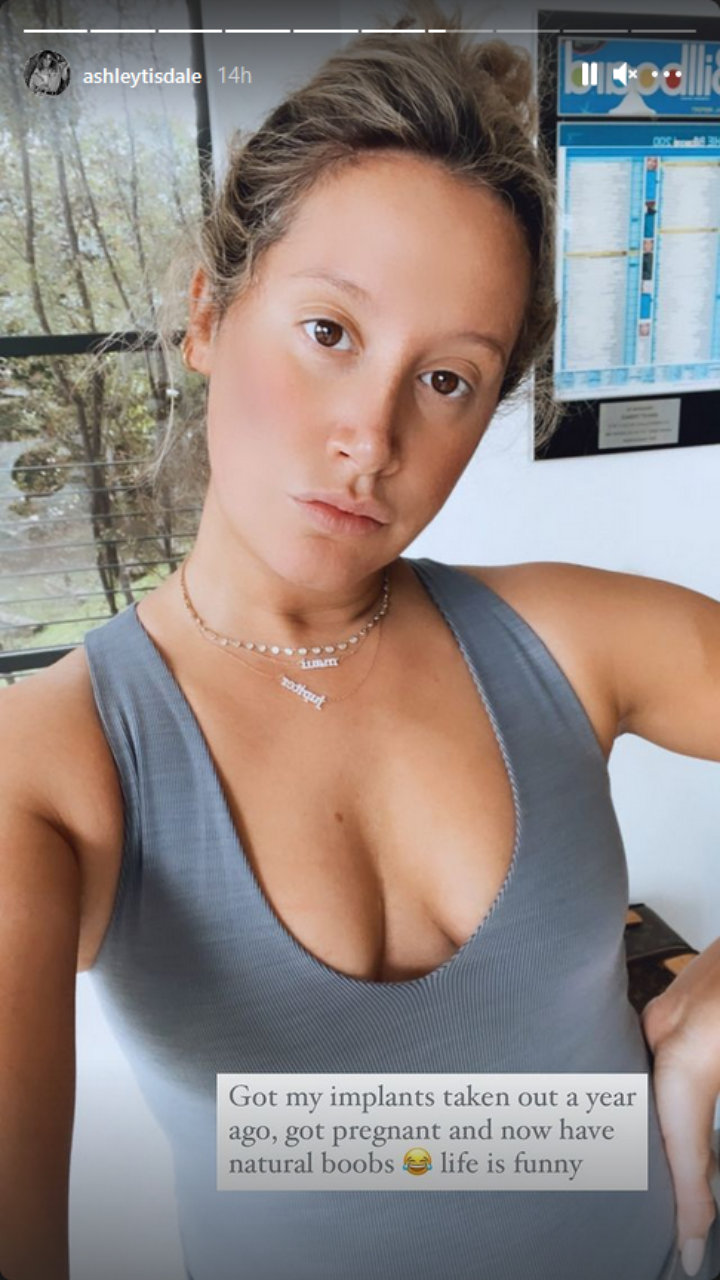 Ashley Tisdale showed off her ‘natural boobs’ as she put her cleavage on full display.

Ashley revealed that she had her breast implants removed back in August 2020. At the time, she opened up on her Instagram account about the reasons behind her decision to go under the knife for removal procedure. Along with a bikini photo that showed her post-surgery body, she began by noting, “Years ago I underwent breast enhancement surgery.”

“Prior to the surgery, I constantly felt my body was less than, and thought this change would make me feel more whole and more secure about myself,” the former star of “The Suite Life of Zack and Cody” shared. “And for a short period of time… it did.”

Elaborating further, Ashley admitted she had been dealing with health issues. “Little by little I began struggling with minor health issues that just were not adding up – food sensitivities as well as gut issues that I thought could be caused by my implants,” she spilled. “So, last winter I decided to undergo implant removal.”

“This journey has been one of growth, self discovery, self acceptance and most importantly self-love,” the wife of Christopher French noted. She added, “This picture above was taken two months after my explant surgery and I think you can tell just how happy I am to finally be fully me.”

In September 2020, Ashley revealed that she was expecting her first child with Christopher. The pair welcomed their daughter, Jupiter, on March 24, 2021. Alongside a black-and-white shot of the couple clutching their newborn’s tiny fingers on Instagram, the actress declared, “Jupiter Iris French arrived earth side 3.23.21.”