In an exclusive joint interview, Miuccia Prada and Raf Simons talk about working together, what to expect in their debut men’s collection and why they think the fashion world isn’t going to change. 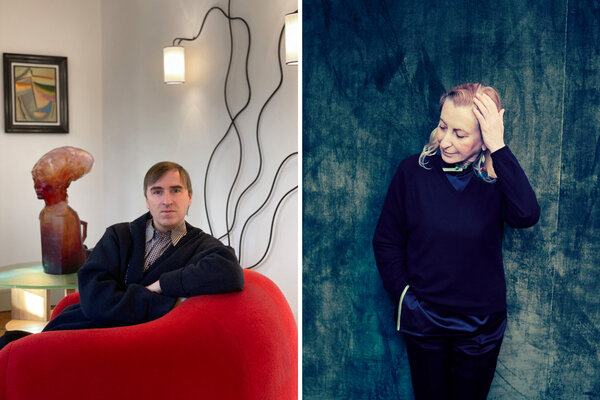 Imagine Mark Zuckerberg naming Elon Musk his co-chief executive, or Steven Spielberg declaring that from now on he would co-direct all of his films with George Clooney. That’s what it was like for the fashion world when, last February, Miuccia Prada announced that she was naming Raf Simons, the former creative director of Jil Sander, Dior and Calvin Klein, to be her co-creative director at Prada.

Now, just under a year later, as both designers prepare to unveil their first men’s wear collection on Sunday, it is apparent that the conversation they started that day is still going on — a conversation in both words and cloth. Mr. Simons, 53, is splitting his time between his home (and brand) in Antwerp, the Prada headquarters in Milan and a Prada-owned villa with garden there, where his two dogs can play; Mrs. Prada, 72, has been quarantining at home.

Though they don’t often share an office, it’s not a coincidence that their debut women’s collection, revealed in September, was called “Dialogues.” Except that because a collection is traditionally a monologue, it was also a major change, one that proved unexpectedly welcome. As to why, well … just listen to them talk. Rarely has eavesdropping on fashion insiders been so fun. The interview has been edited for clarity.

‘The Most Complicated Discussion in Fashion’

Miuccia Prada: You know, I was always criticized because I never wanted to do collaborations. I always thought they were more about selling something, making money, than deep dialogue. But now we are doing a collaboration, and I’m very happy. We haven’t had time to really enjoy working together, though. I am at home, and he is in the office.

Raf Simons: For me, coming here was very different from Jil Sander or Dior or Calvin Klein. I had never bought a piece from any of those brands, but I have been a Prada fan, a Prada watcher, a Prada wearer. I wore only Prada for, like, 15 years, because until a few years ago, I always felt it weird to walk around in my own clothes.

MP: But the job of a designer is not just to make clothes any more. There are so many other issues. I think we are at a turning point, where it will go completely commercial or go more moral. All those thoughts are turning in your mind, so I am glad he is here and we can talk about them.

RS: Where is fashion going? Where do we think it should go? Why is there so much retro? What is new? It’s the most complicated discussion in fashion right now. It used to be the clothes that speak. But now, no matter how much both of us like the idea that the clothes should speak for themselves, it’s not enough.

MP: You have to have a voice. You have to have a more political voice, which I always hated because talking about politics and ideas, being a luxury fashion designer, was always kind of embarrassing. How do you do it without losing content or substance or all the layers? Before I used to work alone. Now we are getting used to working together. Before I never did meetings. Now it’s always about meetings.

RS: We are on a lot of Zooms together, but when it is just the two of us, we talk on the phone.

MP: For me, video is distracting. I don’t even have a computer! On the phone, I am more concentrated. We can talk theories. Like for the first season both of us felt we didn’t want to tell stories. He was interested in defining an aesthetic of Prada, very simplified, and I was on the same track. With all the news you didn’t want to do funny stuff or be irrelevant. 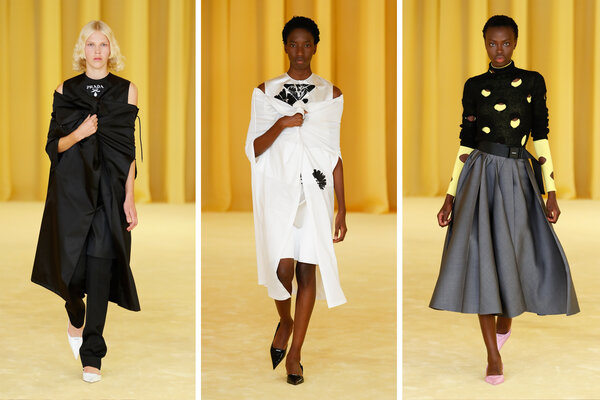 MP: This men’s collection will be more the two of us. We are building. I think it’s more rich. Simple lines but also ideas that are more physical and sexy.

RS: There are similarities with the first women’s show. Then, we both felt it would be refreshing to strip things away from a possible conclusion: Oh, it’s prostitute. Oh, it’s glamorous. We felt very much like reducing. The wrap piece was the most symbolic of the whole collection.

MP: It was the idea of something so simplified — basically it was a rectangle — but also very human. It was a concept more than a piece, and we both loved it very much.

RS: We talked a lot about gestures. The wrap was about going all the way. It’s almost not even a garment, but still it can protect you, decorate you, give you a look. For the men’s, the idea of protection is also there, but in a completely different way. A different way of comforting. The idea of reduction, tactility, which has a lot to do with the fact the world is so much the opposite now.

Also we are going to use all new models again. We like the idea of building up a dialogue and community with the models.

MP: Raf, you always say you don’t want to talk about the show before the show.

RS: Well, I’m not saying much. We also talked about putting men and women together.

MP: But any time you put women in the men or vice versa, something suffers, and even though now gender is totally mixed up, and it doesn’t make any sense to separate men and women in theory, in reality the women is more flamboyant so always takes away from the men. So from a work point of view, I prefer they are separate. Raf probably prefers it together.

RS: I like the idea of together, Miuccia knows that, but I think we have to be honest: It’s partly a marketing decision. Because if you do separate men and women, then you have more moments in the year when you do big shows.

MP: Maybe for you, but not for me, because in the past I was free to do whatever I wanted.

RS: But the one thing that I have found very extreme since we were working together — don’t be shocked, Miuccia — is that an idea could be dropped the last day before the show and a new idea could come in and be there in the show. I’ve never been in a situation where that could even be possible. In my own brand I have to make up my mind like a month before the show.

MP: Everybody hopes you are not following my path. Everybody hates that. For me, what is new is when you check a swatch on a person and imagine the outfit — that I never did. I never really tried things so much on people.

RS: That was a big difference between us. Also, I am used to bringing a lot of visuals, and with Miuccia, in the past, most things comes out of a dialogue. So now it’s both a dialogue and a visual, and it keeps evolving. So whatever you have in place, it might still change a lot. That’s not what I used to do. I think it’s fantastic.

MP: But poor Raf, he cannot have strong music, because for me it is a nightmare. I like music, but in confusion I can’t reason. So he can only have music the day before the show.

‘Fashion Will Not Learn From This’

MP: I think when the pandemic is over, people are going to be very willing to have lives again. Already, China is spending like crazy. Also America. In Milano there is an explosion like during prohibition. They are having crazy parties.

RS: If history is repeating, and it repeats very often, we are in the 1920s now, and we all know what the 20s looked like: an explosion of fashion, going out, sex. There is a possibility it will be very exuberant. It might become dangerously explosive.

MP: But for what that means, nothing is clear. In fashion now, everyone pretends there is a revolution, that it is democratic, ecologic, everything. We have to solve the problem of race, women …

RS: The one lesson I think fashion will not learn from this, which is the one it should learn, if I am being brutally honest, is that it should be less greedy. It became too much this economic machine. For the majority the first desire is economic growth. Everyone just had less growth, so everyone is going to try to catch up. And you can’t do that with only one or two collections a year. The audience at the moment is more interested in surface fashion than in depth fashion.

MP: Traditionally fashion was a very strict group: connoisseurs, journalists. It’s not that the elite isn’t there any more, but this system is broken. Intellectuals don’t want to be vulgar or cheap or oversimplifying, so the result is no one listens to them, and the ones who couldn’t care less, they have a super-big voice with content that isn’t so good.

MP: If you want to go on working, you can’t escape. Companies are criticized because they do too much, but we are judged on the money. I heard once somebody say, “Oh, that designer is really terrible, but they sell so much, it means they are good.” The last few years our numbers were not so good, and in every single discussion, that was the point. So if you want to survive with your company, with all the responsibility of people working for you, I doubt we will do less.

RS: If you make seven children, you can’t say after, ‘I am going to junk five.’ It’s up to a new generation to change the system. Maybe it’s happening and we don’t even know. There has to be a system that grows beside the system.

MP: We are in a capitalist world. That’s the system. It’s easy to say consume less, produce less, but then we need to be ready to have less jobs. Communism was trying to change it, and it didn’t work. Still, today I feel optimistic.

I was looking at an Italian comedy from the 1960s where there was a man who beat his wife. And that was supposed to be funny: “Oh, I beat my wife, so now she obeys.” Something like that is not even thinkable today. I burned my bra in the 1960s when we were doing the feminist revolution, and that was ridiculous. But afterward no one ever dared say to women, “Stay home and do the meat.” So I think we have made a lot of progress.