L.G.B.T.Q. people unite every June, Pride Month, to celebrate milestones like the Stonewall uprising and the activists who have made significant contributions to the advancement of gay rights.

Often overlooked, however, are the unsung heroes of color who have broken ground and continue to make strides. In a year when at least 29 transgender or gender-nonconforming people have been killed, and as states are moving to restrict the participation of transgender women and girls in sports, Black L.G.B.T.Q. artists, performers, entrepreneurs and designers are using their talents to protect and heal, as they have for years.

“I’m willing to help anyone, I don’t care,” said Brenda Holder, a transgender activist and celebrated ballroom performer. “Because of the struggles and the trials and tribulations that I went through, I won’t let anyone else go through it.”

Ms. Holder is not alone in the effort to help L.G.B.T.Q. people. She and four others featured here have been working for decades to open doors through their art, activism, entrepreneurship and mentorship. Collectively, they have created a legacy of empowerment.

Here are their stories. 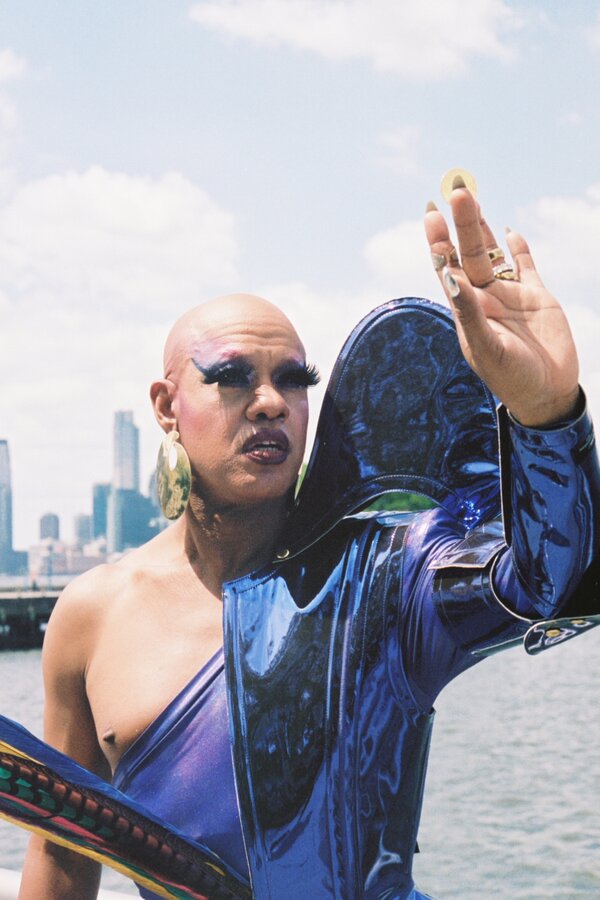 ‘Growing up being Black and gay was always a gift’

Kevin Aviance’s debut as a drag performer was in the fifth grade, in Richmond, Va. He won a talent contest by singing “I Will Survive.”

By his late teens he was a club kid and had joined the House of Aviance, a ballroom house based at the time in Washington, D.C. Mr. Aviance moved to Miami and then to New York City, where he landed a cameo in the video for Madonna’s 1994 single “Secret.”

“That changed everything for the rest of my life,” said Mr. Aviance, 53. The exposure led to bookings, including frequent performances with Junior Vasquez, a D.J., at his popular weekly Arena parties at the Palladium, the Manhattan nightclub.

“It was ferocious,” Mr. Aviance said. “It was amazing. I was a performer. I had one of the biggest stages in New York, I had one of the biggest audiences in New York, every week. It was kind of magical.” Beyond working with Madonna, Janet Jackson and Whitney Houston as a party host, Mr. Aviance had three No. 1 Billboard dance club hits, including “Din Da Da,” in 1997.

“I never stopped dreaming — I dream to this day,” he said. “I just feel like that has kept my head in a beautiful space.” He said he had opened doors for others simply by being himself.

Mr. Aviance recently released a new song, “Mary,” and is planning an album for the fall. “I just want to keep putting out my art and still do me and be Kevin Aviance,” he said. “I don’t know how to do anything else but be Kevin Aviance.”

‘We want to showcase L.G.B.T.Q. designers because the spotlight is not always put on them’

Recognizing the changing landscape of Brooklyn and a desire to give opportunities to unknown fashion designers, Rick Davy in 2004 founded the BK Style Foundation, a nonprofit organization that supports emerging designers and offers programs to young people interested in careers in fashion. An outgrowth of the foundation, Brooklyn Fashion Weekend, evolved into Fashion Week Brooklyn, a semiannual show that features the work of aspiring and established designers from across the globe.

Covering the inaugural event in May 2006, The New York Times wrote that the collections “defied expectations.” Mr. Davy — who declined to give his age, saying only, “I’m not a young man but I’m not an old man” — said that more than 100 people had benefited from the foundation’s classes and community-based design projects, and that more than 500 designers had shown their work through Fashion Week Brooklyn over the years. “We have changed so many lives,” he said.

Originally from Trinidad and Tobago, Mr. Davy took classes in film and TV at New York University before finding work as a production manager for music videos. He moved on to photographing and styling models, and later joined a friend in styling for the syndicated talk show “Forgive or Forget” and the BET countdown music video show “106 & Park.”

“I think my biggest accomplishment is the nonprofit organization and seeing how it grows and how it helps support so many young people,” Mr. Davy said, adding that it has inspired many to create their own brands and become entrepreneurs in Brooklyn. Each fashion week features “SlayWay,” a day dedicated to L.G.B.T.Q. models and designers.

“We want to showcase L.G.B.T.Q. designers because the spotlight is not always put on them,” Mr. Davy said. “We want to really champion that.”

‘The work I do, I don’t do it for accolades. I do it because I love my community.’

Brenda Holder, whose stage name is Brenda Continental, got her start in New York City’s ballroom scene in the early 1980s, when she was 15. She maintains that she was the first femme queen performer to win femme queen vogue — a feminine style of vogue — and was mentored by Paris Dupree and other ballroom legends.

Ms. Holder, 54, who was born in Guyana, began her transition in 1989, after four years in the Army. She was told it wouldn’t be easy. “At that time, society looked at trans people as the lowest scum of the earth,” she said. “And for me it was like, no. I can’t accept that. I can’t. And I didn’t accept it.”

When she was growing up, and during her transition, there weren’t any dedicated spaces or centers for Black and brown L.G.B.T.Q. people in New York, she said. She persevered through setbacks and traumas, including homelessness, drug addiction and living through the H.I.V.-AIDS crisis, and calls herself a “survivor.”

Now living in Brooklyn, Ms. Holder said she talks to anyone in need, particularly people who want to transition.

“The work I do, I don’t do it for accolades,” she said. “I do it because I love my community. I believe in my community. So why not help my community put the best version of themselves out there, because nobody else is going to do it.”

Jerry Jordan-Brown has worn many hats in a three-decade career: fashion show producer, stylist, entrepreneur and casting director for Fashion Week Brooklyn. Mr. Jordan-Brown, 64, who also worked in N.Y.U.’s finance department for 20 years, says he was inspired to pursue a career in fashion by watching his mother work as a seamstress and hairdresser. From the mid-1980s to the 2000s, he worked in production for New York Fashion Week and also with Essence magazine to help produce shows.

Through it all, he found ways to mentor others. “I think my biggest accomplishment is just helping people and giving everybody a chance when nobody would give them a chance to excel in what they do,” said Mr. Jordan-Brown, who lives in Brooklyn. “Because of the capacity I had, I was able to give people an opportunity to do what they loved to do.”

When he was growing up, Mr. Jordan-Brown said, he felt pressure to act like someone other than himself. It was painful, he said. Now, he said, he does what he can to create access for other Black L.G.B.T.Q. people.

“If I can build the confidence, and strengthen the young ones, then they’ll be all right,” he said. “They’ll know how to stand up for themselves.”

‘We have a voice, we have contributed to history and to culture in this country’

In the late 1970s and early 1980s, you could find Lee Soulja working the dance floor in some of New York City’s most exclusive clubs, including Studio 54 and Paradise Garage.

A Bronx native who now lives in Harlem, Mr. Soulja, 55, is a visual and performance artist who has performed off Broadway as well as at Lincoln Center and the Apollo Theater. After a close friend died from AIDS in the early 1990s, Mr. Soulja became an H.I.V. and AIDS activist, volunteering with community organizations to connect with struggling young L.G.B.T.Q. people. He later became a promoter and event creator.

In 2009, Mr. Soulja created the NYC Center for Black Pride, which took over Black Pride, an annual event scheduled to run this year from Aug. 19 to 23.

“I created this NYC Center for Black Pride to give more visibility to L.G.B.T. people of color, saying we have a voice, we have contributed to history and to culture in this country,” Mr. Soulja said. The center teams up with organizations like the Schomburg Center for Research in Black Culture to create exhibits for Black Pride that showcase the wide-ranging contributions of L.G.B.T.Q. people of color, hoping to get young gay, bisexual and transgender people to recognize the value in their lives.

“When I talk to young people, I'm trying to empower them,” Mr. Soulja said, adding that he hears from people from around the world, sometimes in countries with restrictive laws governing the private lives of L.G.B.T.Q. people.

“I tell young people, coming out doesn’t necessarily have to be an announcement to your family or your friends,” he said. “Coming out to me was the moment I accepted myself.”