It’s hard to believe that Marine Serre, the 29-year-old French designer whose work was featured in Beyoncé’s “Black is King” visual album and who kicked off Paris Fashion Week with perhaps the most human, immersive, fully realized digital “activation” of the entire fashion month, founded her brand only three years ago.

Not only does she have a widely recognizable logo that has nothing to do with her initials (it’s a moon print), not only was she upcycling long before it became a trend (and sensed the need for face masks long before they were a medical necessity), but she has her own ideology: ecofuturism.

Sounds like a movement, doesn’t it? But what does it even mean?

In theory, it means exalting nature and the idea of rebirth; replacing the machine worship of the futurists with veneration for the earth. In fashion, it’s a terrific collection.

Or, to be specific: a book, a documentary and clothes that looked awfully appealing to wear.

Eschewing her past apocalyptic visions of the natural disaster we may have wrought — clothes for the wasteland; the pods of humanity that will be left after the storm — Ms. Serre created filmed vignettes of family and friends going about their lives (cooking, gardening, playing on tire swings) while wearing her reworked leather greatcoats and trousers and repurposed knitwear, lacy shirts made from old household linen, and lilac suiting from regenerated moiré. 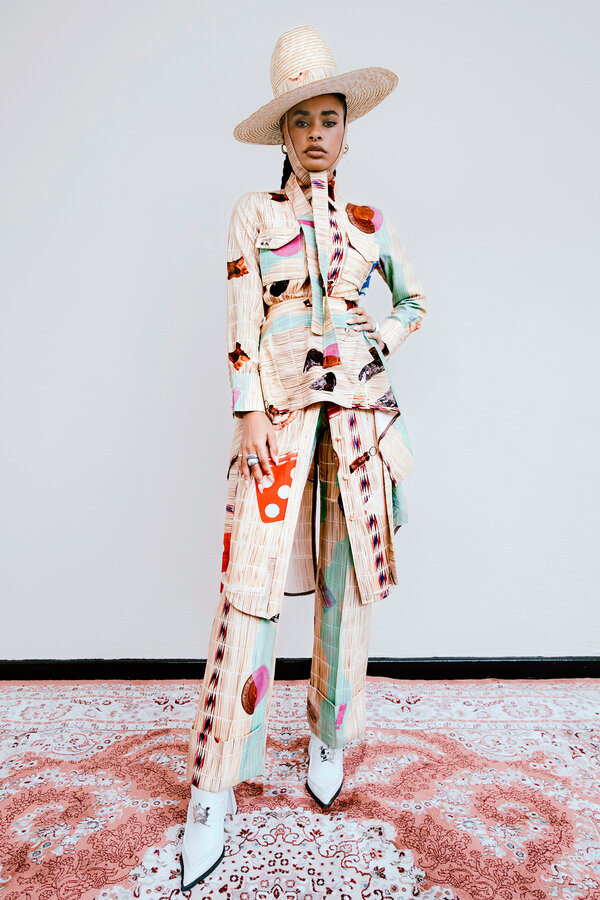 A virtual wormhole was built into each of the scenes, so with a click you would suddenly find yourself in the back story of the garment: the ateliers and scrap factories where the goods get made, watching the team deconstruct and reconstruct the raw materials, giving them new life.

If a chimera was real, this is what it would look like. And that offers hope not just for the planet and our festering piles of stuff, but fashion itself.

Maybe because they have less to lose, or maybe because they have little allegiance to the fashion system that was, much of the most provocative work this season is being made by a new generation of designers. It’s the kind of work that jolts you out of the haze of hours spent zombielike in front of various Zooms and makes you start to think — not just about the problems of now, but about what’s next.

Ms. Serre may be at the forefront, but she’s not alone.

There’s Thebe Magugu, from South Africa, who takes the idea of fashion storytelling to a new level in guerrilla films that use clothes to teach cultural truths — this time about the new embrace of traditional faith healing among his urbanized millennial peers. Working with the director Kristin-Lee Moolman, he etched out a story of gang warfare and spiritual union told in both action and cloth. Safari suiting was made from textiles created to mimic the straw mats a friend used to throw bones (complete with said bone). A black jacket was “scarified” along the spine with Braille threads reading, “What you do to your ancestors, your children will do to you.”

Then there’s the Vaquera gang, Claire Sullivan, Patric DiCaprio and Bryn Taubensee, whose work has grown from blowing raspberries at the establishment to nimbly skewing tropes of aspiration, elitism and gender. This season that meant blowing them out and decontextualizing them, so that satin undies, flamenco flounces and baggy sweats demand a rethink.

And Eckhaus Latta, where Mike Eckhaus and Zoe Latta, working bi-coastally (she in Los Angeles, he in Brooklyn) cut holes in sequin shirts and skirts, shredded denim, snapped (or not) quilted nylon up the side and otherwise used shape to gently confront just how much we’ve come undone.

Not that the disrupters who came before are fading into the torpor of comfortable maturity.

Dries Van Noten, one of the last members of the Antwerp Six (the group of Belgian designers that shook up fashion in the late 1980s and 1990s) still on the official Paris schedule, swapped moody romance for an exhalation of pent-up energy, frustration and desire. Forty-six dancers and models, one or two at a time, writhed, twisted and collapsed on a darkened stage in a visceral mash-up of masculine tailoring and feminine cliché: sugar-sweet Valentine-pink sequins and slithery duchesse silks in boudoir pastels were paired with no-nonsense dark overcoats; crushed taffeta was scanned and superimposed on wool; marabou fuzzed out the lines.

It was a powerhouse of a collection, as was that of Rick Owens, the dark prince of Paris, whose roots lie in the underbelly of the California dream, and who titled his show “Gethsemane,” after the garden in Jerusalem where Jesus prayed before the “final reckoning” (as the show notes read). Because the last year, they went on, was “almost biblical in its drama.”

And so was Mr. Owens’s collection, filmed live on a pier on the Lido, in front of his house in Venice.

Fog rolled across the water as the models streamed forth in puffer robes that framed attenuated insect silhouettes with skinny metallic leggings or sequined thongs atop cashmere body suits. Exaggerated down sleeves (like duvets for the arms) slipped off the shoulders and flopped down far below the fingers; fluted, shredded gowns suggested decaying notions of royalty and pilgrimage.

It was gorgeous and alarming in equal measure, connecting to the aggression of Mr. Owens’s January men’s wear show (some of the bomber jackets and coats were lifted straight off that runway without being downsized for the female form) but with a sense of communion that dangled the promise of something more.

“I know we’re supposed to be all about hope and moving forward, but the menace has not disappeared,” Mr. Owens said before the show, talking over FaceTime from Venice.

“On the other hand,” he added cheerfully, “good has triumphed over evil so far.” Thus turns the fashion cycle of life.