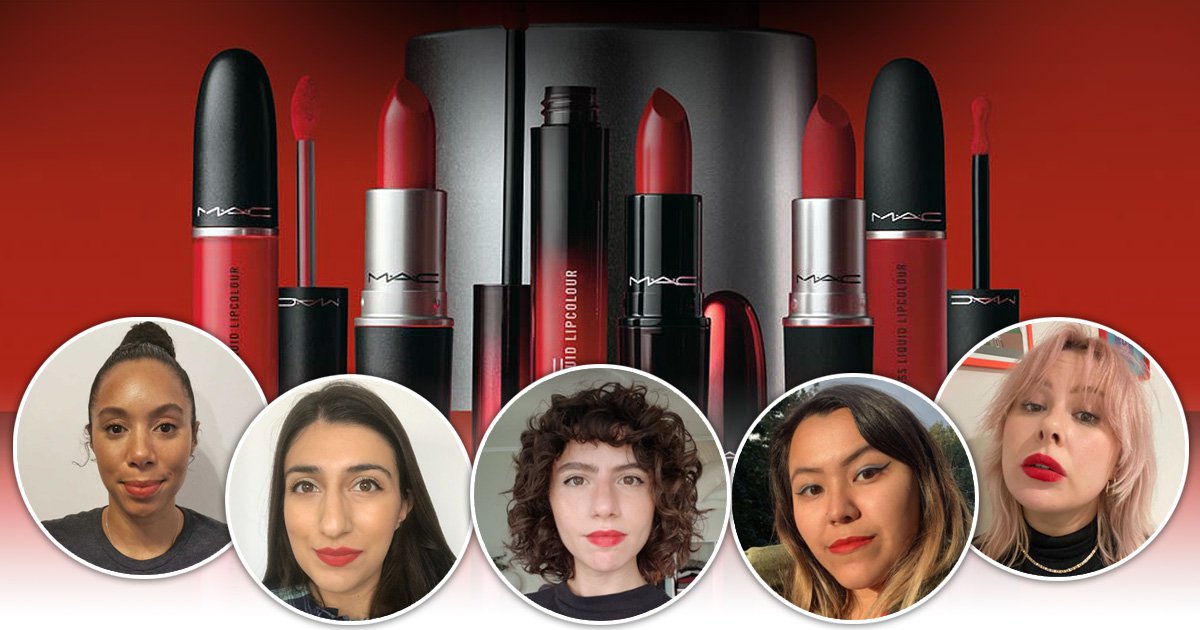 Beauty trends have been all about the eyes, thanks to face masks – but lipstick wearers won’t turn their backs on the bullet forever.

There’s a reason for this, that sales figures have proven over and over.

In what’s been long dubbed ‘the lipstick index’, retailers typically notice the sales of lippie rise during recessions, as they’re an affordable luxury that brings people joy.

Leonard Lauder of Estee Lauder noticed that after 9/11 that lipstick sales rose 11% in the US, and similar sales increases have been found in wartime and the 1930s Great Depression.

There’s the ‘lipstick effect’ – studies have shown wearing it can enhance confidence and esteem – and one report even found applying colour to your lips could boost mental competency.

Over the years, some lipsticks have achieved iconic status. One is MAC Cosmetics’ Ruby Woo – a fire engine red that first launched in 1999.

It’s been worn by the likes of Janet Jackson, Taylor Swift, Angelina Jolie, Dita Von Teese and Rita Ora, to name but a few of those on its long fan list.

Terry Barber, the brand’s director of makeup artistry, tells Metro.co.uk ‘the universal appeal of Ruby Woo is that it’s a pure, clear red’ with balanced undertones, so it works on everyone.

‘It’s one of those shades that people say immediately makes them feel “ready”, even if they’ve not put in much effort elsewhere,’ he adds.

‘It’s not only the purity of colour but the velvet matte formula which has made it stand the test of time.

‘It looks as good as a chic solo statement on an otherwise minimal makeup as it does as part of a full face of glam.

‘The fact that you can dress it up or dress it down, makes it a beauty staple that transcends passing trends.’

He believes ‘when you wear Ruby Woo, what you never feel is indifference’ and there is something to be said for wearing a red in particular when it comes to the mood-boosting capabilities of lippie.

‘When you look at cave art, a lot of the pigments used were red.

‘It has an emotional impact, possibly because it’s the colour of blood and this seems to have psychological effect.’

The colour does something to our psyche that Kassia says can subtly trigger ‘a fight or flight response’, but there’s also its significance in society.

‘When it comes to red lipstick, it’s so intrinsically linked with confidence and statement,’ she adds, giving key references like Marylin Monroe.

Lipstick has taken a backseat over the last two years, given the pandemic and mask wearing – but it’s staging a comeback.

This spring lipstick sales in the US jumped by 80% compared to the year previous when the world was plunged into lockdowns and restrictions – it’s telling of our love of lipstick.

‘I think people have missed that statement of a lipstick, it’s like losing an element of your personality,’ Terry says.

‘A lip colour is like a signal. It can tell others who you are and even who you’re not. It can be armour or it can be allure.

‘Lipstick is that final touch detail which, when you take it away, somehow makes you feel incomplete.’

In what feels like an overdue ode to Ruby Woo, MAC has a new collection centered on the shade.

In three new formats, along with the original, it’s now even truer to say there’s a Ruby Woo for everyone.

MAC’s Ruby’s Crew limited edition collection launches today. Here’s what our team think of the iconic shade in all its new formulations:

The original bestselling bullet of which four sell every minute around the world, and five every hour in the UK.

‘I’m a big fan of red lipstick, but after an ex said he didn’t like it on me many years ago I’ve become somewhat nervous to wear it. Ruby Woo is a perfect red for anyone who doesn’t think they suit red, with a blue tint that makes your teeth look whiter.

‘It’s matte, so while it doesn’t go on creamy, it stays put for ages (even more so if you go full retro and use Lipcote over the top). Despite having that coveted matte finish, it won’t flake or go crusty like the matte liquid lipsticks that had us in a chokehold in 2014.’ – Jessica, Lifestyle Reporter

‘I think Ruby Woo is such a wearable red. I avoided lipstick for much of my youth as I thought my lips were too big, and worried about products that would dry or crack – so I love how this feels moisturising, and goes on so smoothly.

‘I really like the slightly more orange tone, rather than a deep or dark red, which makes it feel like something I could wear in the day time without feeling self-conscious. For me, it’s a really quick way of giving a pop of speedy glamour to an everyday look.’ – Natalie, Deputy Lifestyle Editor

‘I was expecting a much deeper shade based on the colour of the tube, but it came out vibrant and dangerously close to pink on me. However, my flatmate said she sees a solid red, so that seems to be debatable.

‘Either way, I feel cute wearing it. It seems the Powder Kiss version is a lighter shade of red than the original.

‘As for application, it goes on really easily, feels nice, soft and velvety on, and doesn’t leave my lips feeling dry. Even though I put a couple of layers on, it’s not a solid opaque colour but it’s still nice and bright, which I like.’ – Aidan, Lifestyle Reporter

‘The Powder Kiss Liquid isn’t at all what you’d imagine when you think of a traditional liquid lipstick – it’s creamy and will transfer, which I found a little inconvenient with such a bold red.

‘Like Aidan, I found the Powder Kiss range to be lighter in tone (because it’s a more feathery texture) than the original Ruby Woo, but this still looks vibrant and fun, which is all I want from a red lip.’ – Tanyel, Lifestyle Reporter

‘This shade of red definitely works for me as it’s bold and bright, which is how I like my makeup to be. I love the feel of the lipstick as it isn’t cakey nor does it dry my lips out. It’s easy to apply and stays on all day long, which is exactly what you want from a bold red.’ – Michele, Freelance Lifestyle Reporter

You can shop the range here.

This article contains affiliate links. We may earn a small commission on purchases made through one of these links but this never influences our experts’ opinions. Products are tested and reviewed independently of commercial initiatives.