James Wilt, razor-sharp in a jet-black suit, stood between his two daughters: Melinda Stone on his left, beaming in a white, floor-length gown, and Mary Wilt to his right, in a sparkly knee-length dress.

Ms. Stone, 56, and Ms. Wilt, 51, each held their 79-year-old father’s hands, and all three began moving forward as Mendelssohn’s “Wedding March” began playing. The two sisters were celebrating both their weddings in one single ceremony on May 29 at Frisco Commons Park in Frisco, Texas, about 30 miles north of Dallas.

Father and daughters were soon on a stage in full view of their combined 80 guests, where they met their soon-to-be husbands: Calvin Hodges, 59, whom Ms. Stone had met 14 months earlier at a supermarket in Plano, Texas; and Rob Andrews, 51, Ms. Wilt’s high school sweetheart.

Seated in the front row were Cathy Lavallee, the mother of the brides, Abbie Wilt, their stepmother, and Dolores Hodges, Mr. Hodges’s mother.

In the early minutes of the ceremony — led by the Rev. Dr. Conway Edwards, who was ordained by the Caribbean Choice For Christ — the brides presented the mothers with long-stem, white roses. Tears, including their father’s, began to flow. 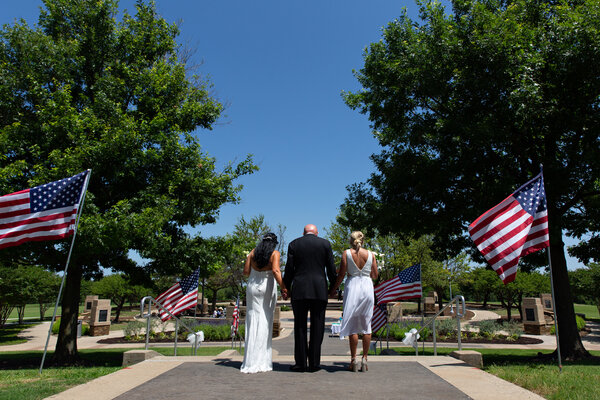 It was Mr. Wilt who suggested his daughters have a double wedding.

“About six months ago, he said, ‘The two of you have always been best friends, and both of you want a May wedding. Why not get married together? It would be twice as special,’ ” Ms. Stone said. “We just looked at each other, laughed and said, ‘Why didn’t we think of that?’”

One of the grooms, Mr. Andrews, agreed.

“It’s a rare but wonderful opportunity,” he said.

“This time, we all got it right,” said Ms. Stone, who works as a real estate agent at Coldwell Banker Apex in Allen, Texas.

The bride’s younger sister agreed. “We are all blessed to have this second chance,” said Ms. Wilt, who works as an assistant surgery technician specializing in the sterilization of medical instruments at AdventHealth Sebring, a hospital in Sebring, Fla.

“The fact that our father and mother are here to see this,” she said, “it’s amazing.”

Ms. Stone and Mr. Hodges — each of whom have two children — met in March 2020 at the deli counter of a market in Plano.

“We started talking while his turkey was being sliced and he asked me if I would go out with him on a date,” Ms. Stone said.

“I was like, ‘Yeah, sure, I’m single, I can do things like that,’” she said, laughing. “We texted each other twice before either of us left the store.”

[Sign up for Love Letter and always get the latest in Modern Love, weddings, and relationships in the news by email.]

Ms. Wilt first dated Mr. Andrews at Plano East Senior High School, “which was certainly a much better time in my life,” said Mr. Andrews. In the decades since, he said, he has undergone several serious medical procedures.

Mr. Andrews and Ms. Wilt reconnected in 2016, when his cellphone rang, and he heard her voice for the first time since they were high school seniors. She had been divorced for about a year.

He filled her in on his medical hardships. “I was horrified when he told me all that had happened to him,” she said. “Honestly, I couldn’t believe he was still alive.”

“But Mary saw past that, and wanted me for who I am,” said Mr. Andrews.

Ms. Stone, a graduate of the Art Institute of Dallas, was living in Allen, Texas, when she met Mr. Hodges, a resident of nearby Frisco, Texas. For their first date, she invited him to her apartment for homemade lasagna.

Over dinner, Mr. Hodges, a human resources director at the Methodist Dallas Medical Center who once played football at the University of Texas, from which he graduated, asked Ms. Stone, “What are you looking for in a man?”

He was surprised when she reached into a pocket and pulled out a crumpled piece of paper titled “Melinda’s Husband Traits.”

Much to his amazement, she had written down 46 traits that any man who wanted to date her must possess. Trait No. 1 was that he be “Christian, honor God, put Him first.” Trait No. 37? “He likes to be touched and likes to touch me.”

She handed it to Mr. Hodges, who admitted he was “kind of shocked at first,” though Ms. Stone quickly allayed his fears: “Don’t worry,” she said to him, “You possess every trait on my list, and more.”

Though rain had been forecast for the double wedding, there were only blue skies above both couples, who gathered with friends and family in a reception area shortly after two separate exchanges of vows and four “I do’s.” There was one botched “you-may-now-kiss-the-bride” moment that was flagged by Dr. Edwards, whose call against the groom, a former Longhorn wide receiver, was that his kiss attempt came up too short.

Much to the delight of the guests, Dr. Edwards declared a do-over, and the bride and groom huddled for a longer kiss, prompting thunderous cheers from the guests.

The Menu At the reception, 80 guests dined on a variety of pasta salads, finger foods and sandwiches as glasses of Champagne were served.

Bad Hair Day Ms. Stone reported that her hairdresser was 45 minutes late on her wedding day, which resulted in “throwing my wedding dress on five minutes before the wedding started,” she said. “At one point I thought, ‘Well, this wedding is going to start without me,’” adding, “Thank goodness I made it just in time.”

Got Milk and Bride Mr. Hodges said he would not have met Ms. Stone if he had not forgotten almond milk at the supermarket the day they met and returned to buy it.

No Ring to Bear One of Ms. Wilt’s three bridesmaids forgot to bring along the ring that Ms. Wilt was going to give her future husband, and raced back to her hotel room to retrieve it in the nick of time.