Lauren Thomas knew on their first date, in San Francisco’s Mission neighborhood in 2018, that Charles Finkel was intent on capturing her attention. She just didn’t know quite how intent he was.

The two had initially met through a mutual friend in 2017, but Ms. Thomas was seeing someone else then. A year later, when Mr. Finkel heard that there had been a breakup, he sought a reintroduction, and that led to the first date.

“I completely loved her from the beginning,” said Mr. Finkel, 39, who graduated from Columbia and is a software engineering manager at Sigma Computing, which builds data analytics tools. “I shouldn’t say ‘loved her,’ but I saw all the qualities that made me attracted to her right from the beginning. Her smile, her laugh, her personality — she was very outgoing, very smart and she just had a positive energy. And she was fun. And she is beautiful.”

For their date, they toured murals in the Mission neighborhood of San Francisco, where both lived, and as they were walking back to her apartment, he made another stab at impressing her by buying a painting at a garage sale. 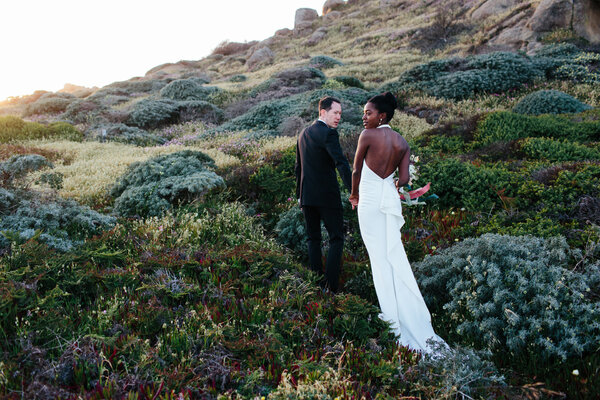 “It was just like a nature scene, fully framed, and pretty ugly in retrospect — we don’t have it anymore,” he said, saying that he wanted to show that he was someone who could just pick up artwork on the street. “I think maybe she thought it was endearing.”

She did. That evening, the two shared a first kiss.

“I liked him,” Ms. Thomas said. “He started to open up and talk more about himself, and by the end of the date, I had a really good impression.”

Just a few weeks later, Mr. Finkel planned a trip to Carmel-by-the-Sea, and the two enjoyed it, and each other, so thoroughly that they decided to spend the night there.

On the way back the next day, they stopped for a beer along the coastal highway.

“It was just like a really nice ride back after a nice time that we had, and we were both feeling good,” Mr. Finkel said. “I think that was the time that I definitely felt things for her. We were playing the song ‘Cruisin’ by Smokey Robinson. That was sort of the mode, just cruising. That’s sort of our song now.”

The couple married May 22, at the Timber Cove Resort in Sonoma, Calif., in an outdoor ceremony before 60 guests that was led by the Rev. Tyrone Pittman, a pastor of Bethany Baptist Church in Brooklyn. They had planned to have the wedding a few months earlier, in Hawaii with 130 guests, but were forced to change their plans because of the pandemic.

In other words, Mr. Finkel’s early efforts at wooing Ms. Thomas — the dog treats, the flowers, the street-found artwork and drive down the coast with the top down — were incredibly effective.

“Charles and I were recently asking the question, Who said ‘I love you’ first, and neither of us remembers,” Ms. Thomas said. “But we both had the same experience driving back from Carmel: There was a moment when we realized this was going to be ‘the’ relationship.”