When Kendall Jenner posted a photo of herself in a yellow bikini on her Instagram account last week, the image yielded some 6 million likes and 17,000 comments.

Suffice it to say there is enormous interest in whatever Jenner wears, which is why German fashion e-tailer About You tapped the American model for an exclusive capsule collection for summer that includes that very itsy-bitsy, teeny-weeny swimwear style.

The range drops at midnight CET on July 25 for 72 hours only. A second collection is planned for fall 2021.

“She is probably the biggest fashion icon and model there is right now,” enthused Donald Schneider, founder and creative director of Donald Schneider Studio in Berlin, who masterminded the collaboration and campaign for Hamburg-based About You, which operates e-stores in 23 European countries.

“With her 174 million followers, her personality and her fashion style, she is a unique inspiration for the younger generation,” said Schneider, noting that many people tried to source that yellow bikini, even though Jenner didn’t mention it was part of the Kendall for About You collection.

They will know soon enough, with Jenner set to announce the project on her social channels, with About You following up with a countdown campaign featuring videos and photos, all starring the popular model. There is also a newsletter available via sign-up at Aboutyouexclusives.com. 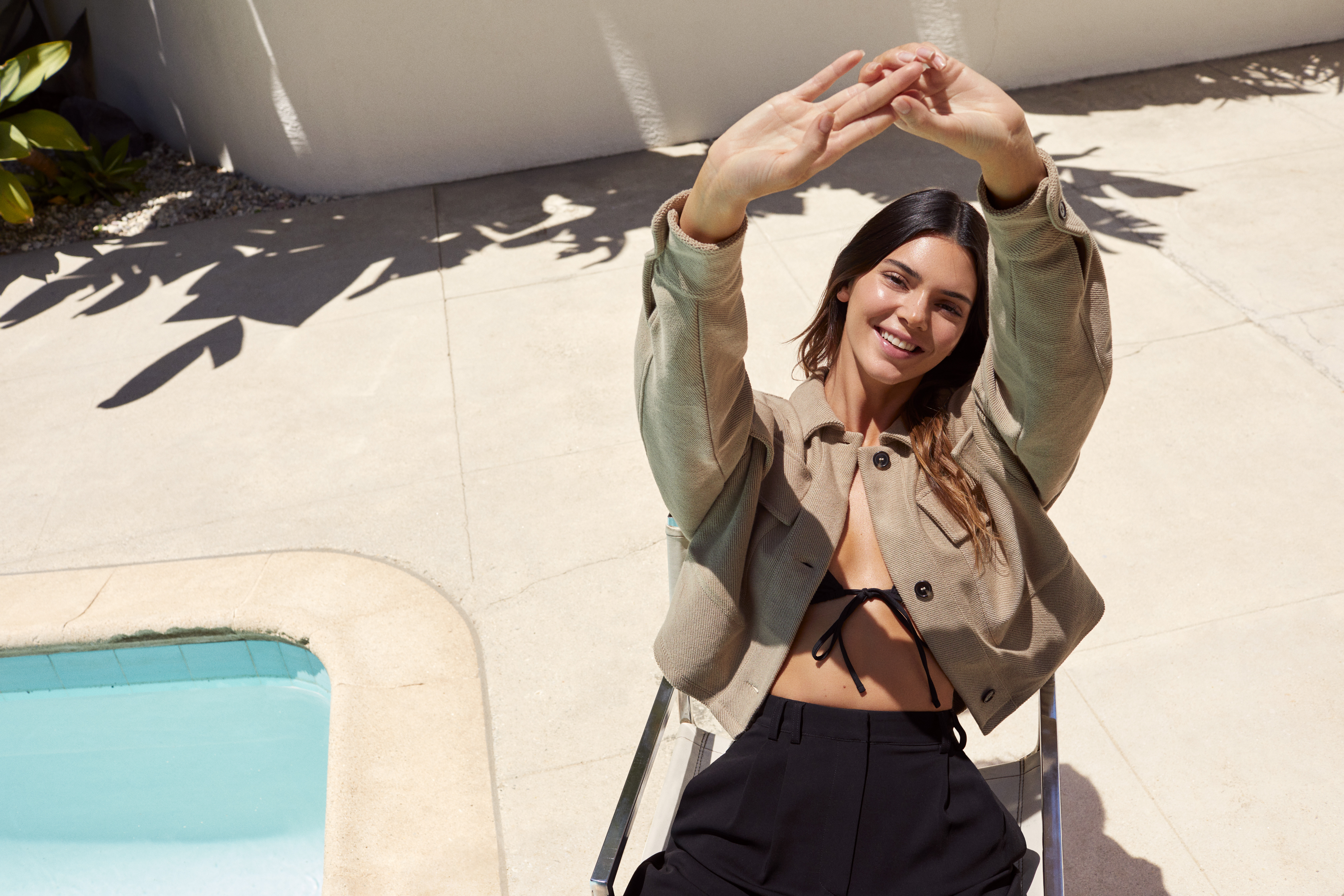 The Kendall Jenner for About You line includes swimwear, casualwear and a few tailored pieces. Zoey Grossman

“Our goal is to create a hype, a fear of missing out — so we are spending 70 percent of the media budget on the teaser phase and 30 percent on the launch phase,” said Julian Jansen, director of content at About You.

Since it’s the retailer’s first digital-only campaign, with a particular focus on Instagram, top fashion influencers like Chiara Ferragni and Georgina Rodríguez are also involved, he noted.

The first 11 styles landing later this month include cropped blouses and jackets, tailored pants, knit biker shorts and cropped tanks, a sweatshirt, T-shirt and minidress, priced from 39.90 euros to 79.90 euros.

“I love basics. You can combine every piece in the drop as a mix and match,” according to Jenner.

The collection was inspired by Jenner’s personal style and her favorite pieces of the moment, according to Schneider, who conscripted fashion consultant Claudia Hofmann to collaborate with About You’s fashion team on the designs.

Each individual piece is numbered and has a special code that includes Kendall’s birthday: 11/03.

Photographed by Zoey Grossman at a private home in Beverly Hills, Calif., the campaign depicts a fresh-faced and smiling Jenner hanging out by the pool, riding a bike and a skateboard, plus playing fetch in the yard with her adorable pooch Pyro. She also looks every inch the supermodel posing in a red minidress in front of a 1960s muscle car. 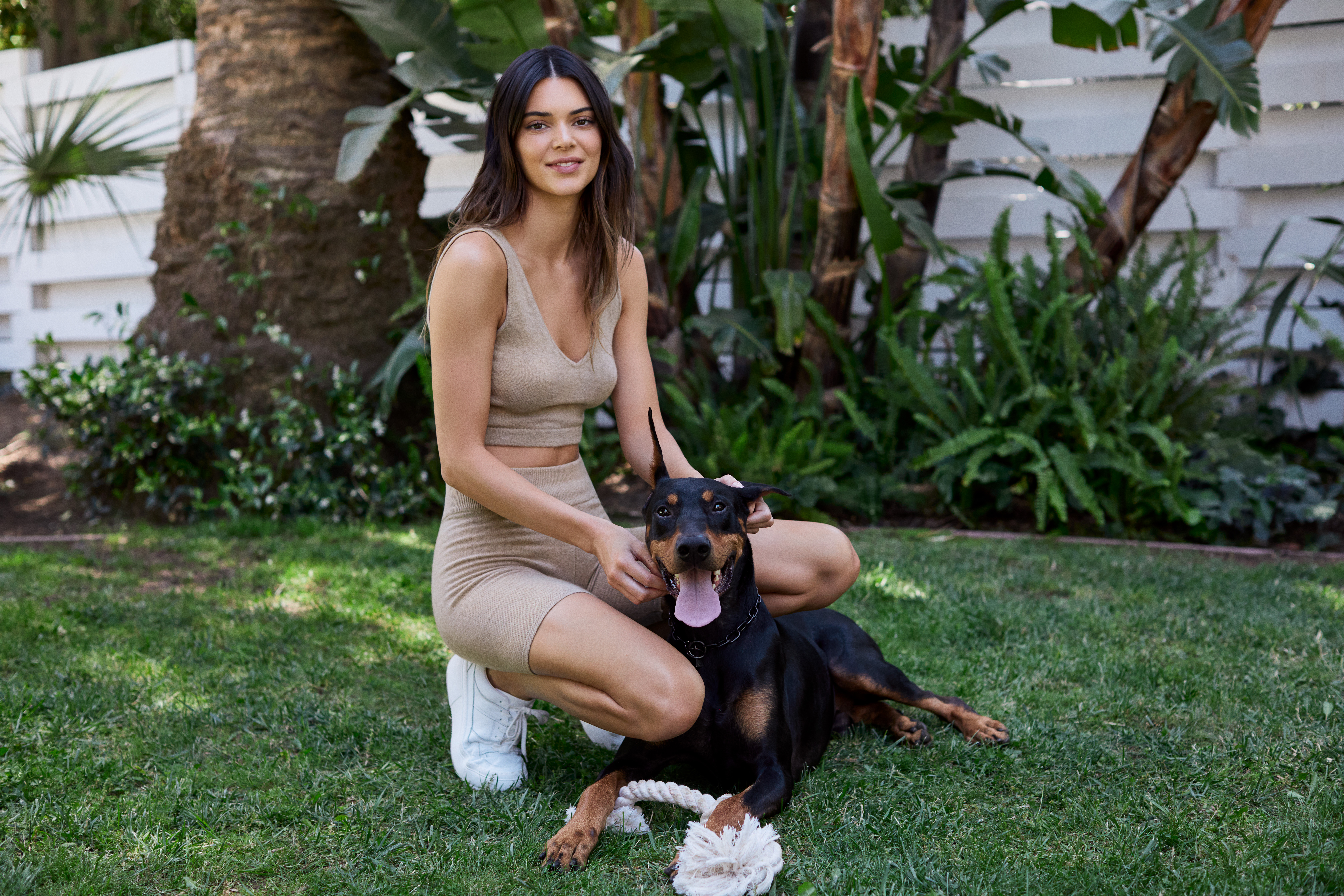 In an interview, Schneider said About You has big ambitions, and the Jenner project is designed to create “a powerful international big bang.”

According to him, Jenner immediately embraced the project, which focused on her off-duty personal style and everyday pastimes. “From our first talks on, it was all about authenticity,” Schneider enthused. “We wanted to keep it all natural and real.”

Over the two-day shoot, Schneider also quizzed Jenner casually on camera. “Today it’s important to get people’s voices but not scripted,” he said. “That makes the shoot more personal, organic and real.”

About You bills itself as one of Germany’s largest fashion retailers, with revenues in excess of 1.17 billion euros, and a mobile-first approach to shopping some 2,000 brands, which include the likes of Polo Ralph Lauren, Tommy Hilfiger, Lacoste, Levi’s, Nike and Vero Moda.

The in-house About You brand is designed in Berlin and focused on easy-to-wear clothing and accessories, while its Edited brand is more trend-focused.

About You launched in Germany in 2014 and gradually branched out across Europe, adding online stores in Spain, Sweden, Finland, Denmark, Bulgaria, Croatia, France, Ireland, Lithuania, Latvia and Estonia over the past year.

“We aim to build the best digital fashion destination for generations Y and Z,” Jansen said, stressing About You’s emphasis on a personalized shopping experience and exclusive products. “This is what distinguishes us from other e-tailers. Kendall For about You is just the beginning. A second drop will follow in November as well as other exclusive drops with international VIPs. “