Cameron Ellis Rotblat was relieved to see Jenny Lu still sitting at a table at Barbuzzo, a Mediterranean restaurant in Philadelphia, after he showed up a half-hour late for their first date on Jan. 2, 2016.

“I see this very beautiful woman sitting at the table looking a little impatient,” said Mr. Rotblat, who had met her through the Tinder dating app on Christmas Day.

“He was late, but it didn’t hinder the date that much,” said Ms. Lu, who was living with her parents in Mickleton, N.J., while working in Philadelphia part time at Ronald McDonald House and pursuing a post baccalaureate pre-med program at the University of Pennsylvania, from which she graduated.

Within 15 minutes they cleared the air, and over pasta compared notes on modern European history. (Each double-majored in history — she with neuroscience, he with global affairs.) Ms. Lu, whose parents are from Shanghai, was also impressed that Mr. Rotblat spoke Mandarin, and that he had been a Yale-China teaching fellow at Sun Yat-sen University’s Zhuhai campus.

After sharing a salted caramel budino custard,they took the Market-Frankford subway line to a beer hall in the Fishtown area, and around 6 p.m., after six hours together, they went their separate ways.

“Honestly I thought that was it,” she said, but added him on Facebook anyway. “Maybe friends see each other once in a while.” 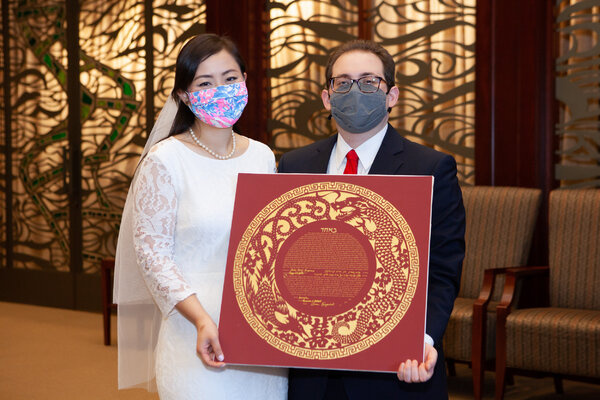 Mr. Rotblat had higher hopes, and messaged her a few days later while she visited a friend in Austin, Tex., and their messages took off. At the end of February, they had their second date in New York, where she was visiting another friend.

“I was really struck how easy it was to talk to Jenny,” he said, “how genuine she was, how caring.”

They walked around Central Park that afternoon,and later went for sushi and to a bar on the Lower East Side. By the end of the date they agreed to try a long-distance relationship, and parted with a kiss.

Over the next two and a half years they braved flat tires on the New Jersey Turnpike, surprise winter storms and train delays. They celebrated Chinese New Year with her family, and Passover Seders with his.

During the summer of 2017 Ms. Lu visited him in New York and Hong Kong, while Mr. Rotblat, now 30, interned at the law firm Debevoise & Plimpton. He is currently an associate in its tax practice in Manhattan.

“I was applying broadly to med schools mostly along the East Coast,” that summer said Ms. Lu, 27, now a third-year medical student at Albert Einstein College of Medicine in the Bronx. “He’s always been my greatest support system.”

In the summer of 2018, they got an apartment in Astoria, Queens, and six months later he planned to propose in Philadelphia while they visited his parents the week his brother, Jeremy Rotblat, a Fulbright fellow in Tajikistan, was in town.

“In the middle of the night I woke up feeling awful and Jenny said I should do a video call with a telehealth doctor who prescribed antibiotics,” said Mr. Rotblat, who came down with a head cold, fever and bad case of conjunctivitis. Before they headed to the local pharmacy, Mr. Rotblat got down on one knee at 3 a.m. “My future doctor was right there.”

They planned to get married in May 2021 at Camden County Boathouse in Pennsauken Township, N.J., with about 120 guests, but in September, with no end to the coronavirus in sight, they decided to get married sooner.

On Nov. 24 Rabbi Aaron Krupnick officiated and led the ceremony with Cantor Alisa Pomerantz-Boro at Congregation Beth El in Voorhees, N.J. Their parents and his brother attended. (Ms. Lu converted to Judaism in 2019, and is taking her husband’s name). The couple’s red and gold ketuba incorporated traditional Chinese symbols of good fortune: a dragon, a phoenix and the Chinese character for double happiness.