John Legend has been one busy bee since the pandemic started. He’s performed at the inauguration, on several livestreams and is now back as one of the coaches on “The Voice.” But the entertainer still found time to work with Sperry on his first signature collection of men’s shoes, which will launch this fall.

Legend has been a global brand ambassador for Sperry since last year and is featured in its marketing campaigns and social media content. But this marks the first time the two are collaborating on a collection.

Sean McDowell, Sperry’s vice president of product and design, said the three styles in the Sperry x John Legend collection are based off of existing models that were specially designed to reflect Legend’s style. There will be keyboard prints on the footbed, quotes by the musician printed on the inside of the tongue and a hand-stitched JL logo on each piece. There will be a Cupsole, a hybrid loafer/boat shoe; a Commodore Legend Tall Boot, and the Authentic Original Legend Boot that features a 10-eye mid-calf high boot with an update of the brand’s classic 360 boat shoe lacing.

The collection will be available on Sperry.com and at select retailers in late September and will retail for $120  to $250.

WWD: You started working with Sperry last year. How did that partnership come about?

John Legend: I’ve always admired the brand. I’ve always felt it was such a classic brand — really great leisurewear with a great heritage. They reached out to me about embarking on a long-term relationship and I curated some collections and finally it got to the point where we’re collaborating on the design.

WWD: Is this something you always wanted to do or just as a result of the relationship with Sperry?

J.L.: I’ve always had an interest in fashion — it’s part of my job in some ways — but it’s also been something I’ve taken a lot more interest in as I’ve developed in my career as an artist. There’s just so much interaction with the fashion community and I have so much respect for what they do. So when Sperry offered me the opportunity to collaborate and try to bring our worlds together, I thought it was a great idea and a great way to build our partnership. They have certain shapes they’re known for and we wanted to not completely screw that up but collaborate in a way that merged the best of Sperry with my own sensibility. I’m so happy with how it came out. It was really a collaborative effort to work with their design team and my stylist, Dave Thomas, who has been with me since 2008 and knows my taste really well. 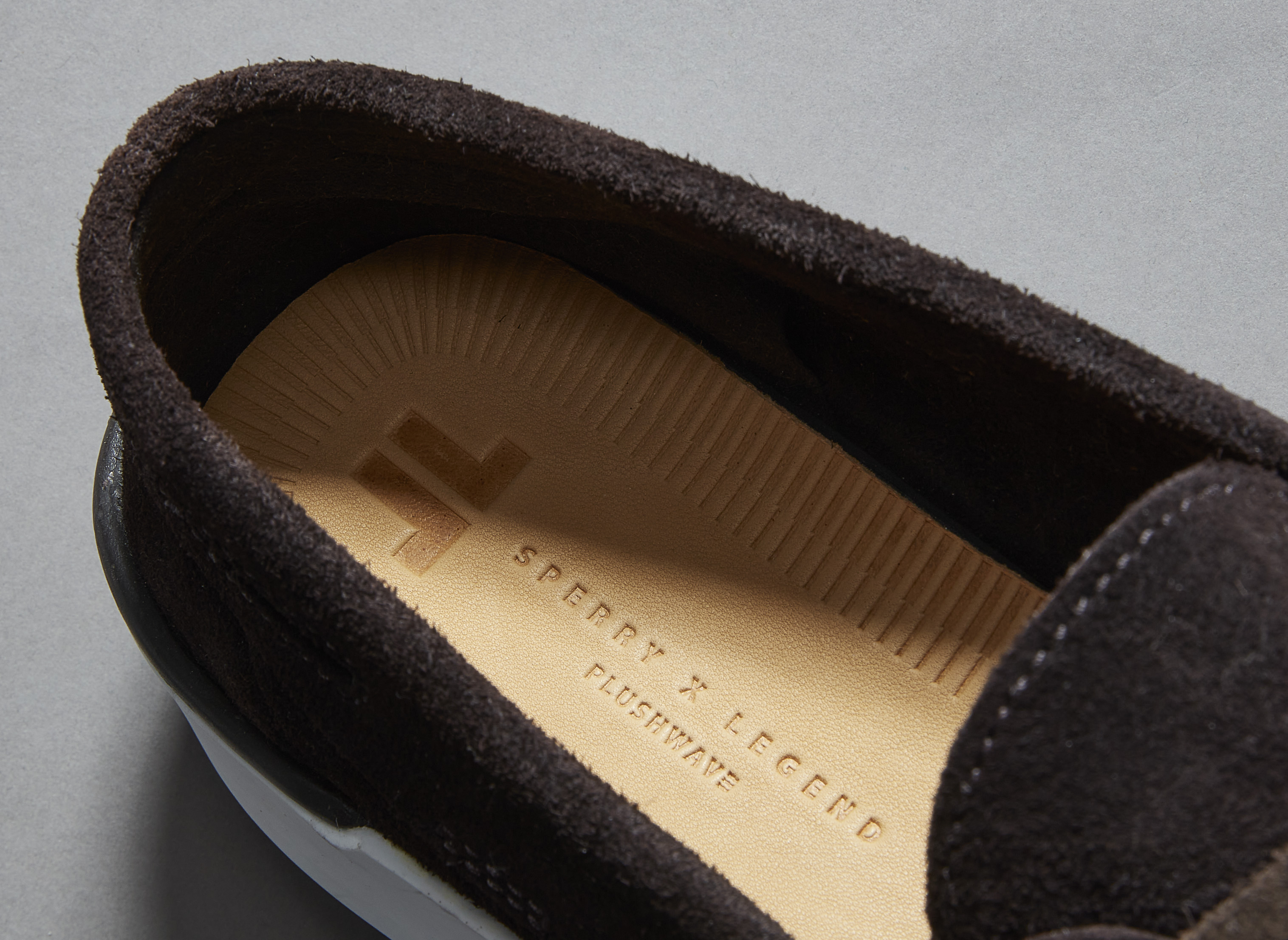 WWD: How are you going to tell your fans about the collection?

J.L.: I’m going to promote it, I’m going to wear it — I wanted to be sure it would be something I would be proud to wear myself and not just recommend to others. I’m sure we’ll have a strong social media plan around it and we’ll take some photos with it and get it out there to the audience.

WWD: You mentioned fashion before. You really have become known for your fashion sense — the Alexander McQueen kilt suit you wore for the Grammys went viral. How would you describe your personal style and do you have any designers that you especially like?

J.L.: I am wearing a lot of McQueen lately — I love what they do. I’m wearing Gucci, Rich Fresh, Saint Laurent, a range of great designers and brands. I love classic shapes and styles but with a twist. That McQueen suit for the Grammys was a great example: in many ways, it was a classic shape, but then that half kilt really made it rock star and gave it a cool twist. 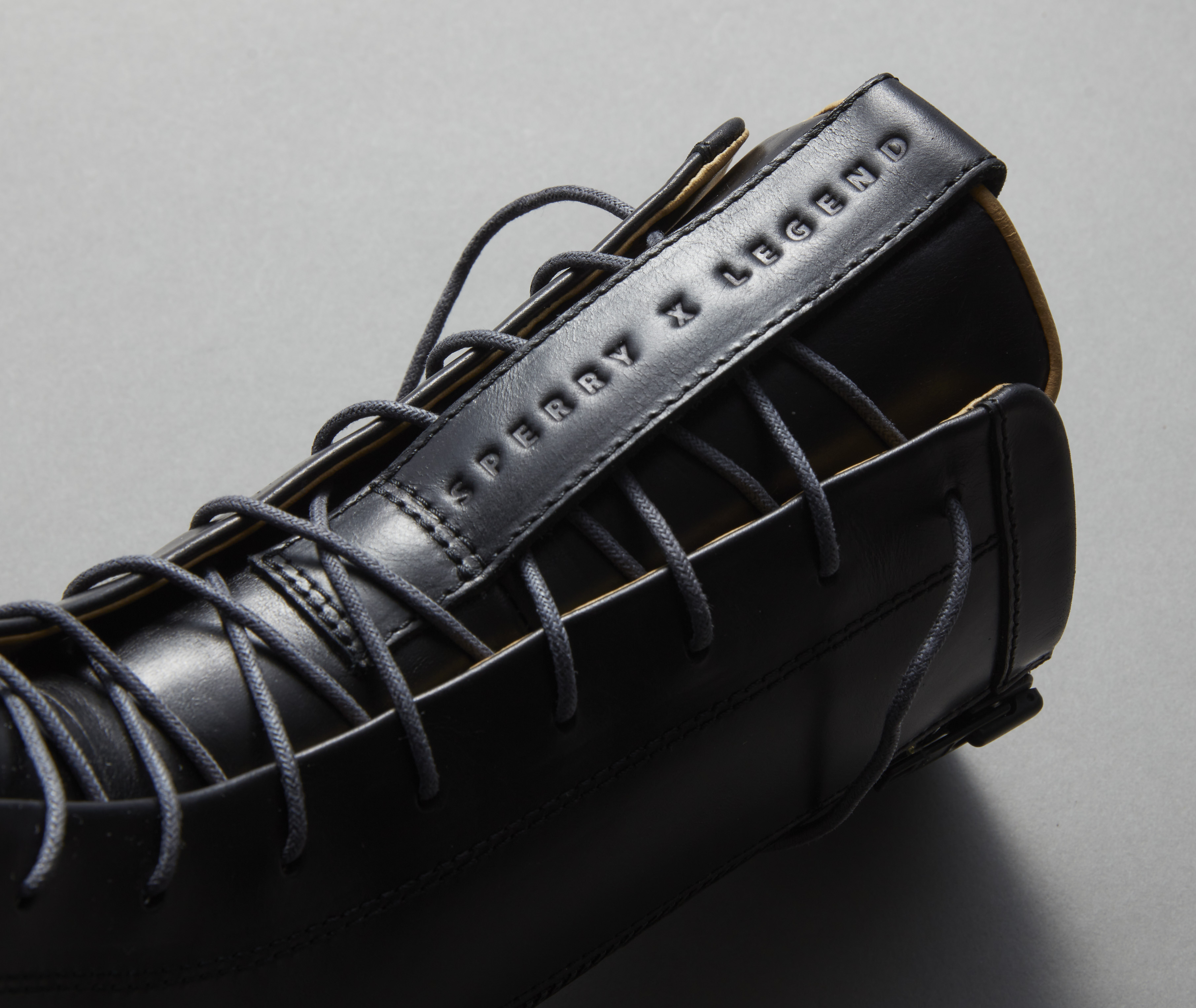 A look from the Sperry x Legend collection.

WWD: Who’s more of the fashionista in the house then — you or Chrissy?

J.L.: I think we both love fashion. We both see it as a way to express ourselves and collaborate with really great artists. Expression is really the best word because it says, “This is who I want to present to the world today.” Fashion is a cool part of our lives and we enjoy collaborating with great designers and expressing ourselves through fashion.

WWD: Now that you have your own signature shoe line, would you ever think of launching your own apparel collection?

J.L.: I’ve always considered it but I’ve been so busy doing other things, it hasn’t been the first priority…yet. Again, I love collaborating with other artists and I see fashion as an art form. I don’t claim to be an artist in that sense, but I do have my own taste and my own sensibility and if the right collaboration came along, I would be interested.

WWD: You’ve been quite busy during the pandemic, at a time when a lot of other artists have struggled to stay in the forefront. How have you managed to stay so visible?

J.L.: A few things: one, I’m pretty self-contained as a performer so it’s easy for me just to play the piano and accompany myself and it doesn’t require a lot of bells and whistles or things other artists may need. So it made it easier for me to just sit down and do a livestream or whatever. Early on, we were all just trying to figure out how to be in the same space as anyone else, but now that we’ve got rapid testing and masks and different protocols, it’s easier. In the beginning, it was hard for people to put it all together and I was in the fortunate position to be able to entertain people.

WWD: You were part of the inauguration as well. How was that experience?

J.L.: It was such a magical moment. I was so happy to be there — that mall, that memorial, that whole area of Washington, D.C., has so much history and so many things have happened in that space. Most of the performers had to pre-tape because of COVID-19, so it was a very rare privilege for any of us to be there live to perform at the Lincoln Memorial. I was able to bring my family, we were able to take pictures there, and then to have that culminate with the first Black woman, the first Asian-American woman vice president, inaugurated — she gave a speech right in front of me. I was able to sing a song that was made popular by the great Nina Simone, who is one of my favorite artists — I named my daughter Luna Simone after her. So to be able to sing that song in that space was quite a magical moment and one I’ll never forget.

WWD: You’ve championed a lot of social justice initiatives over the years. Why is that important to you?

J.L.: I consider myself political — not that I want to run for office or anything, but I’m a citizen of this country, I pay taxes, I’m engaged in what is going on, I’m engaged as a voter. I care about what our leaders do in our name, and whenever I have an opinion, I like to contribute to the conversation by working with activists and thought leaders on policy issues. I’m not shy about contributing my voice to the conversation on what I think would be best for the country.

WWD: Lightening it up a little bit: you’re back to filming “The Voice.” Are you doing that in person?

J.L.: Yes, we don’t have an in-person audience but our coaches and the singers are all there at the studio. Fortunately for us and the Hollywood production community, we’re able to find a way with all the right protocols to put on the show, and it’s great because so many of my friends are not able to tour right now, so I feel very fortunate that “The Voice” is still happening and we get a chance to put on a great show for the people and also get all these artists, who audition for our show, to be heard and to play live when there aren’t that many opportunities these days for that to happen.

WWD: You’re going to be working with Brandy and going up against Nick Jonas. Is he the big threat this season?

J.L.: He’s the only one of us who hasn’t won, so I feel like he’s very hungry, but he’s very young and we’ll see if he’s got the savvy and the experience he needs to coach someone to victory. He’s definitely angling for this one.

WWD: You also have two songs expected to be nominated for Academy Awards. That’s pretty exciting.

WWD: With everything on your plate, what is next for you? Are you going to teach the kids to play piano or do you have other projects?

J.L.: I think one of them might want to take piano lessons, but I’ll give them time to decide. I’m not going to push it on them, but I’ve got “The Voice,” I’ve been working on a new album. I’ve been in the studio quite a bit working on new music, I’m feeling very creative lately. It’s been a while because after I put out “Bigger Love” I didn’t create much new music since last spring, I’ve been busy doing lots of other things, but I felt when the new year came around, I was excited to get in the studio and write again. I’m loving some of the new songs and I’m excited for them to get out to the world. We’re going to take our time and get it right, but I’ll keep creating and when it’s ready, I’ll put some new music out.