If I had to name the most stylistically polarizing character of the year, it would be one Emily Cooper, a.k.a. Emily in Paris.

Where to start with Sex and the City creator Darren Star’s latest offering? The show follows an American 20-something who moves from Chicago to Paris for a social media strategy job, and, quite honestly, I’d be wary of hiring someone for that job who has only 48 Instagram followers, but okay, cue suspension of belief. Cue the whole culture shock narrative, rife with clichés about French and American people alike, sprinkle in a love triangle in which Emily hooks up with her new French friend Camille’s boyfriend, cementing her as the actual villain of the show instead of her boss, Sylvie, and garnish with some fashion CHOICES in a very whitewashed version of Paris, and there you have Emily in Paris in a nutshell. 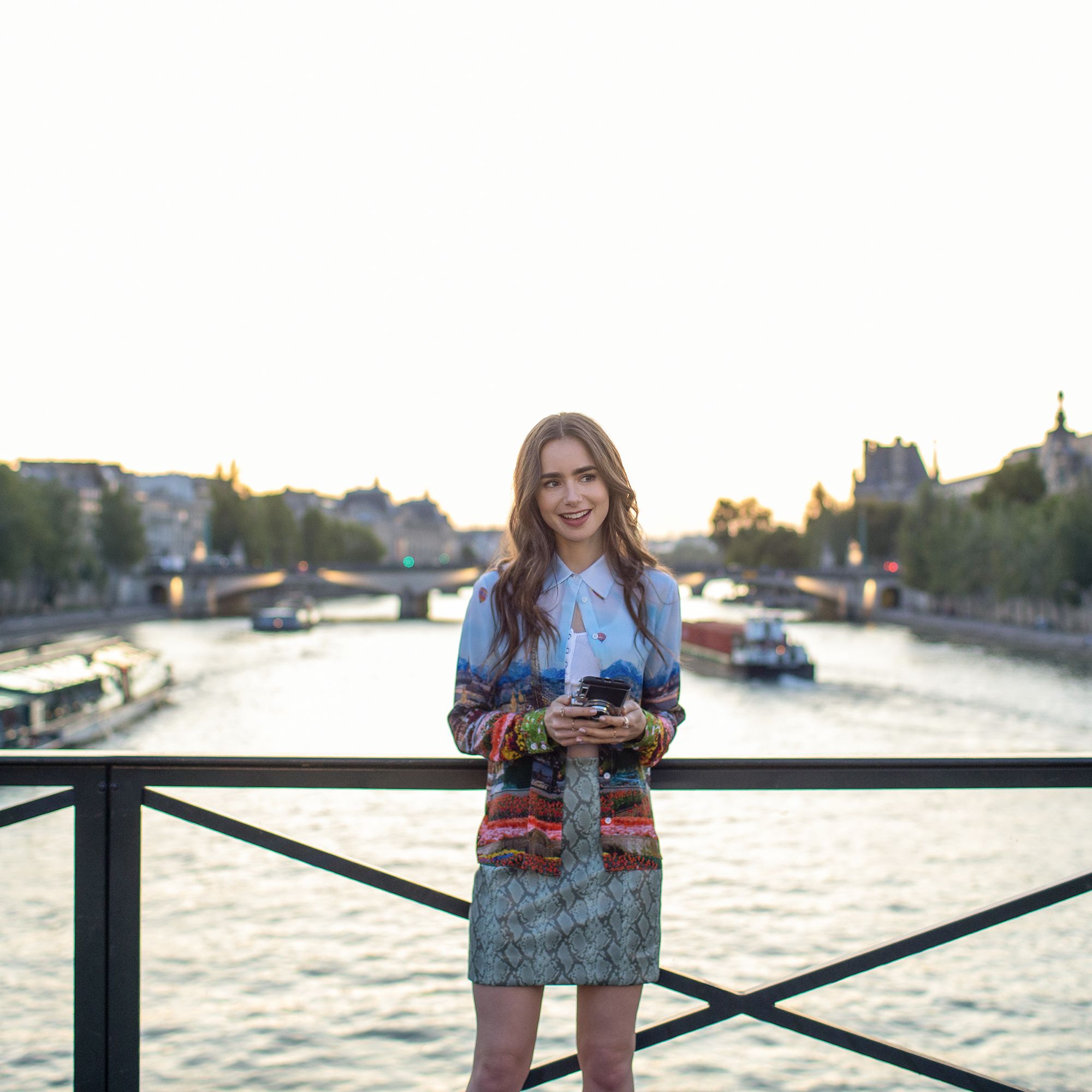 Emily is fresh off the plane and ready to make a splash at her new office. This Alice + Olivia Eiffel Tower print blouse is cute … for Chicago maybe, but it’s giving me overpriced Montmartre souvenir shop vibes while worn in Paris. So … it’s perfect? The Ronny Kobo snake-print miniskirt moment can stay. And let’s talk about the shoes. Emily Cooper has coins, honey! Rare Paris-print Christian Louboutin Gorgona boots kinda coin! Okay, Emily, I see you. Game on. 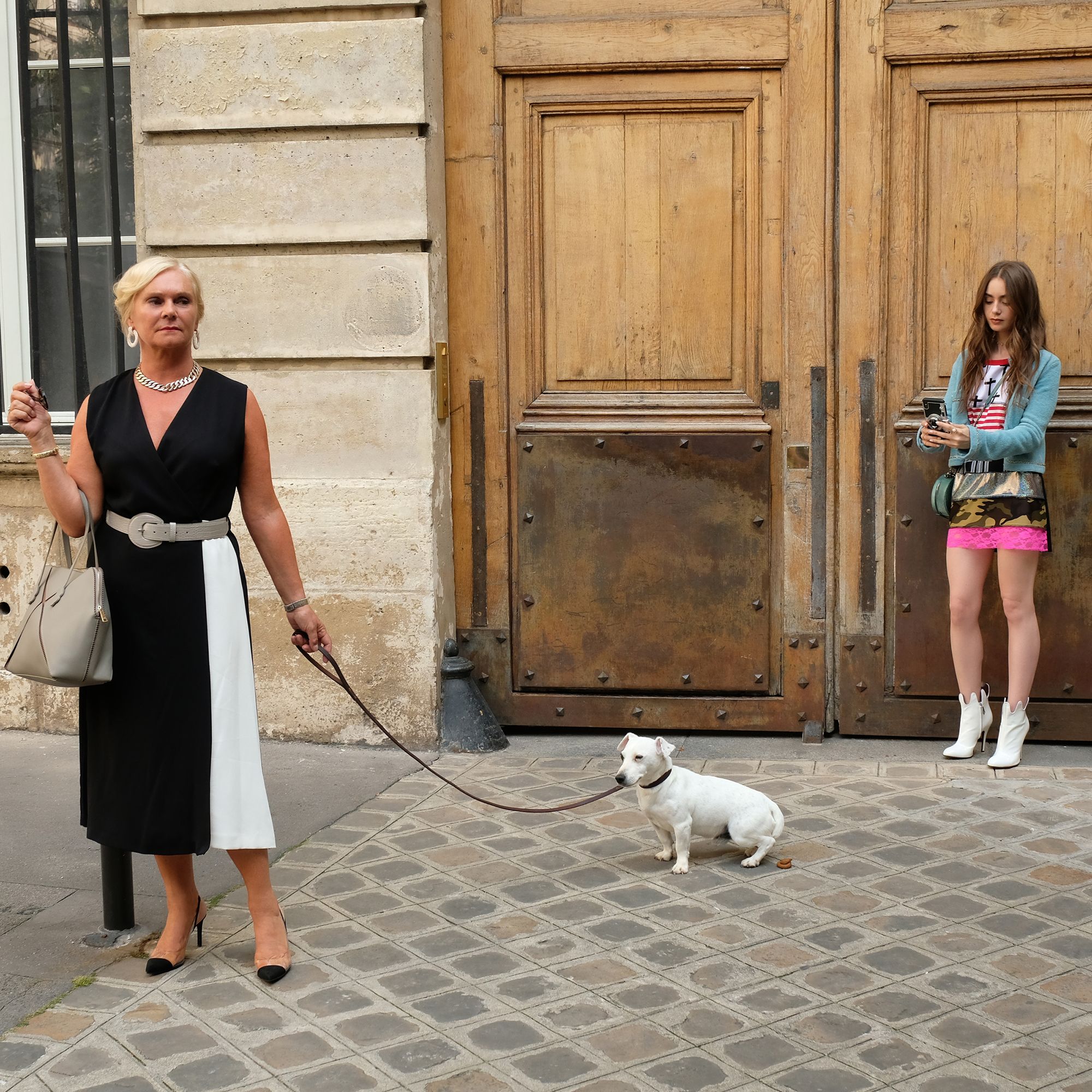 We see the Emily Cooper fashion train really start to run away with a dress by Dope Tavio that I can only describe as utterly unhinged. Hot-pink lace? Camouflage? Holographic? Tartan? All mixed together? Grounds for deportation! And yet, Emily is supposed to be this unsophisticated girl who knows nothing about fashion and she’s out here casually in a Chanel Cruz 2020 cardigan like it’s nothing, accessorized with a Chanel fall/winter ’17 collection Act 2 Round as Earth bag and Vivienne Westwood Freed boots. Emily is one of those girls with more money than style, quel horreur. 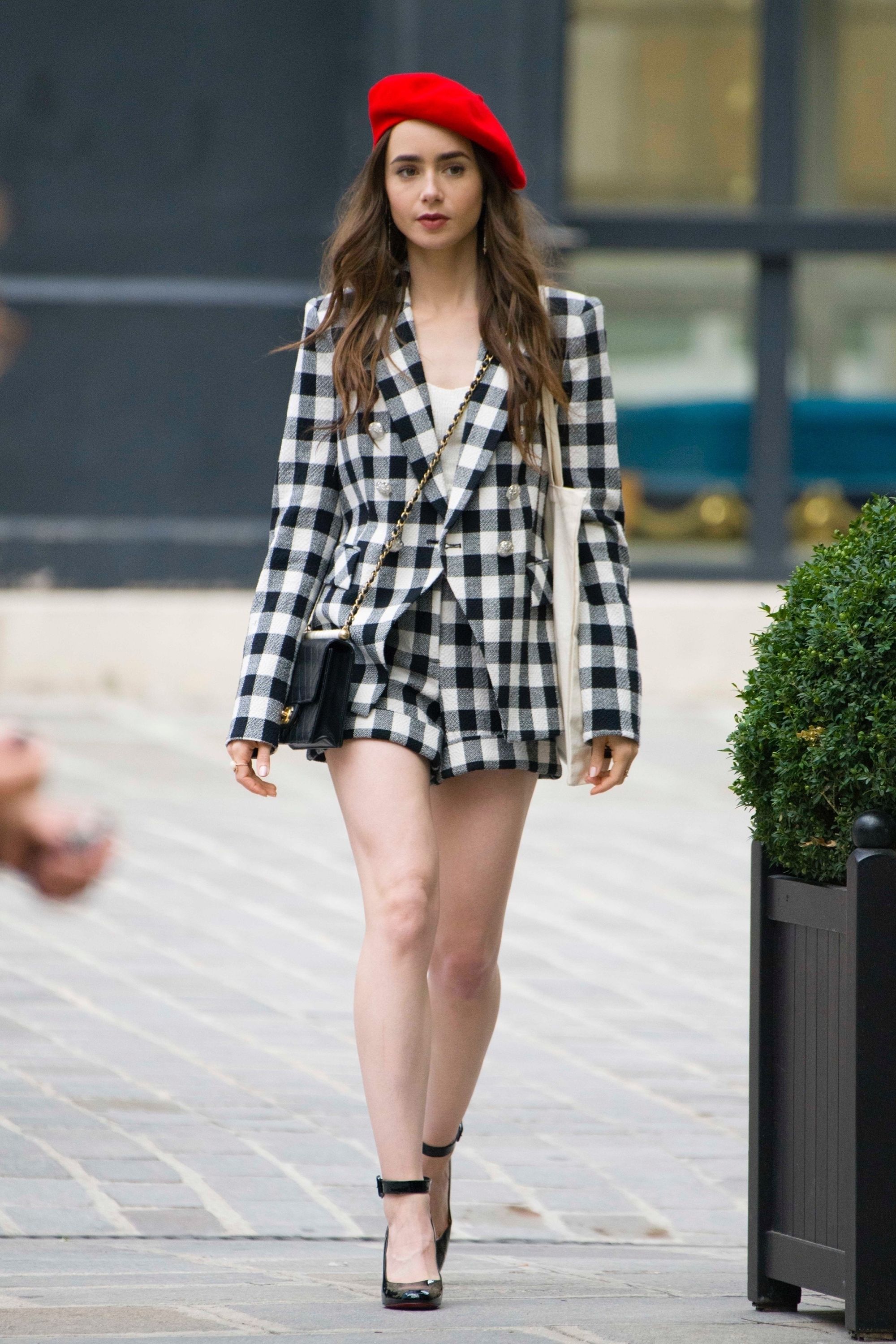 There is nothing too obscene in Episode 3, unless you count the amount of Chanel Emily owns. She’s out here double-C strapped like it’s nobody’s business—I really need to know what her monthly salary is, because this wardrobe is EXPENSIVE. In this episode, I find her black-and-white-checked Veronica Beard blazer-and-shirt combo paired with a Chanel lambskin flap bag, black patent-leather Christian Louboutin Soval ankle-strap pumps, and red beret quite pleasing. It’s a cute look, I’ll give her that. 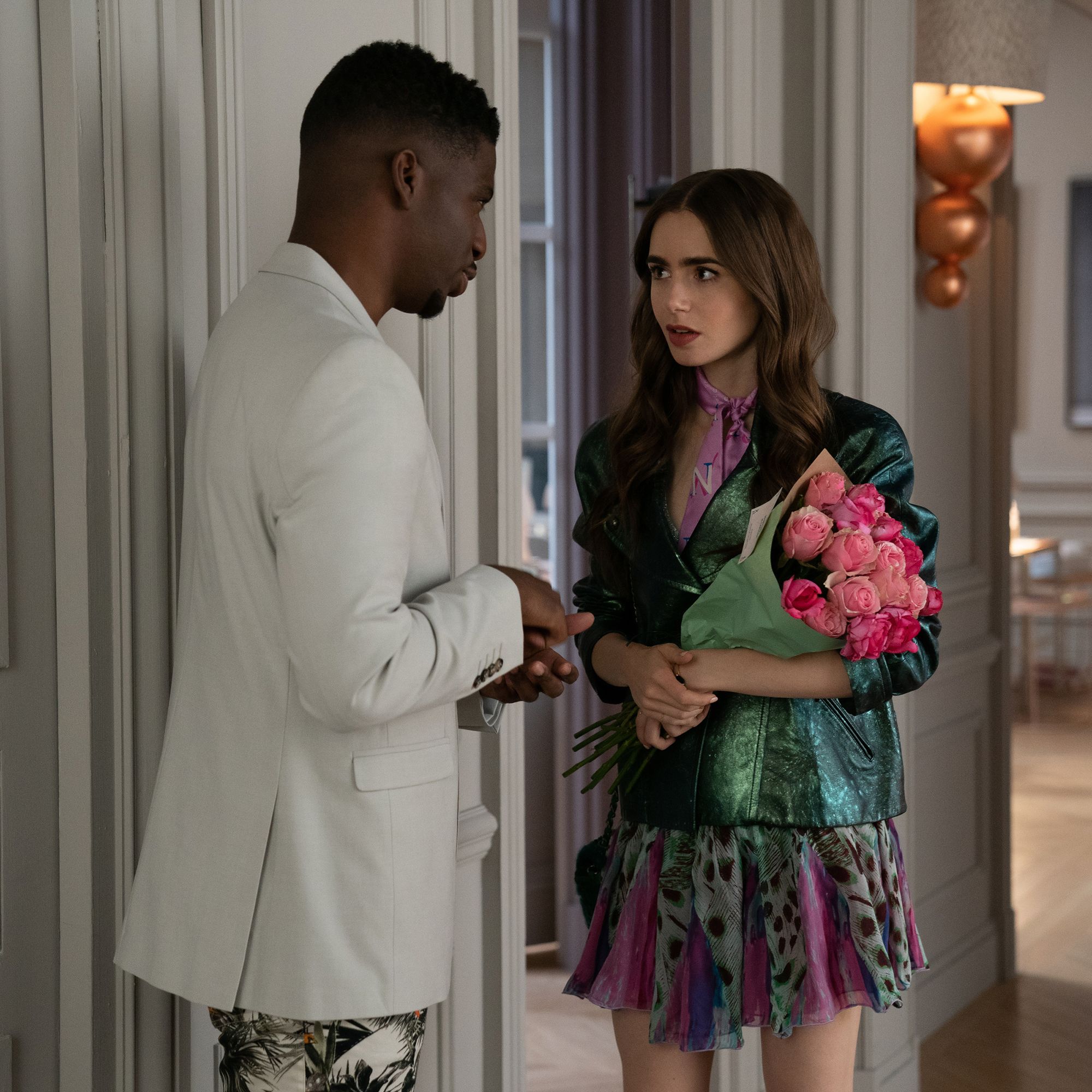 I’m convinced Emily knows more about fashion than she lets on. She is not one of those “two handbags and a bottle of Chanel No. 5” girls, she’s out here in RUNWAY pieces, like this metallic trench coat from the memorable space-themed fall 2017 show paired with a twill logo scarf from the house—which should have been the one thing she took off before leaving the house, if she were following Coco’s advice. 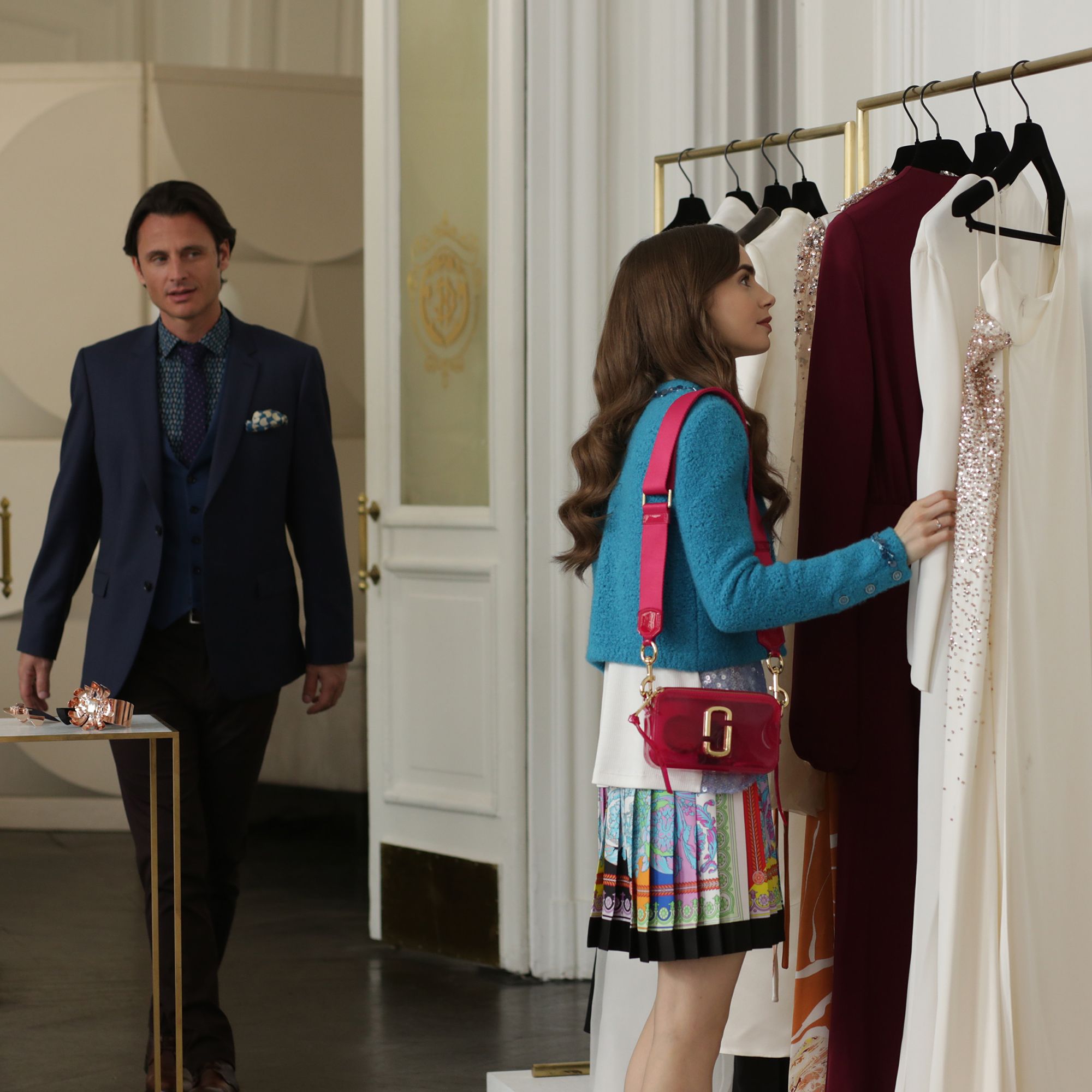 She had me at the Versace spring 2019 Technicolor Baroque silk skirt and lost me at the sequined Chanel spring 2020 cardigan. Chanel and Versace are polar opposites, and this attempt to bring them together bound with a Marc Jacobs jelly Snapshot bag is a fail for me. I have no idea who Emily is stylistically other than an expensive mess, but I guess if you’re gonna be a mess, that’s the best kind to be. 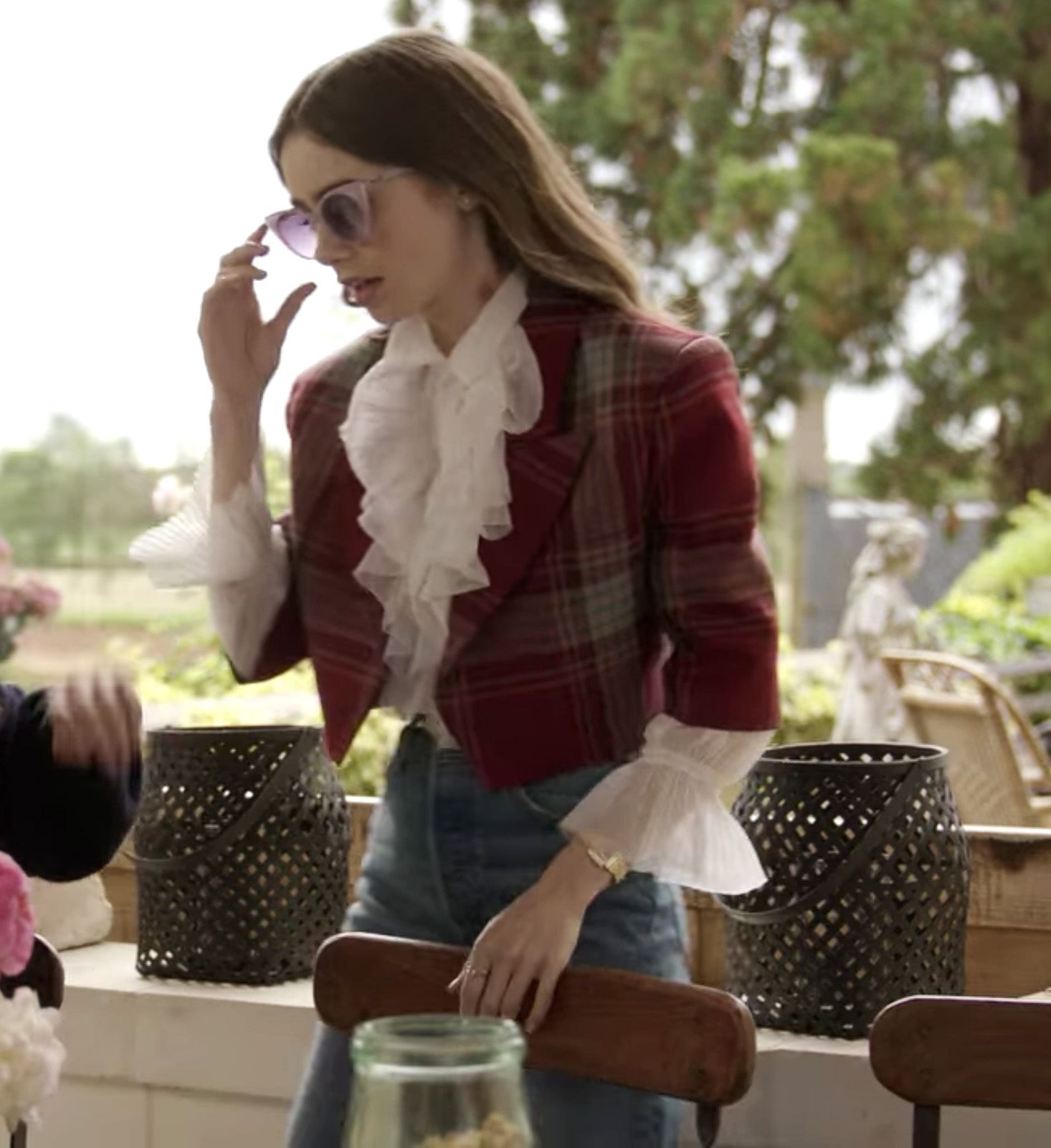 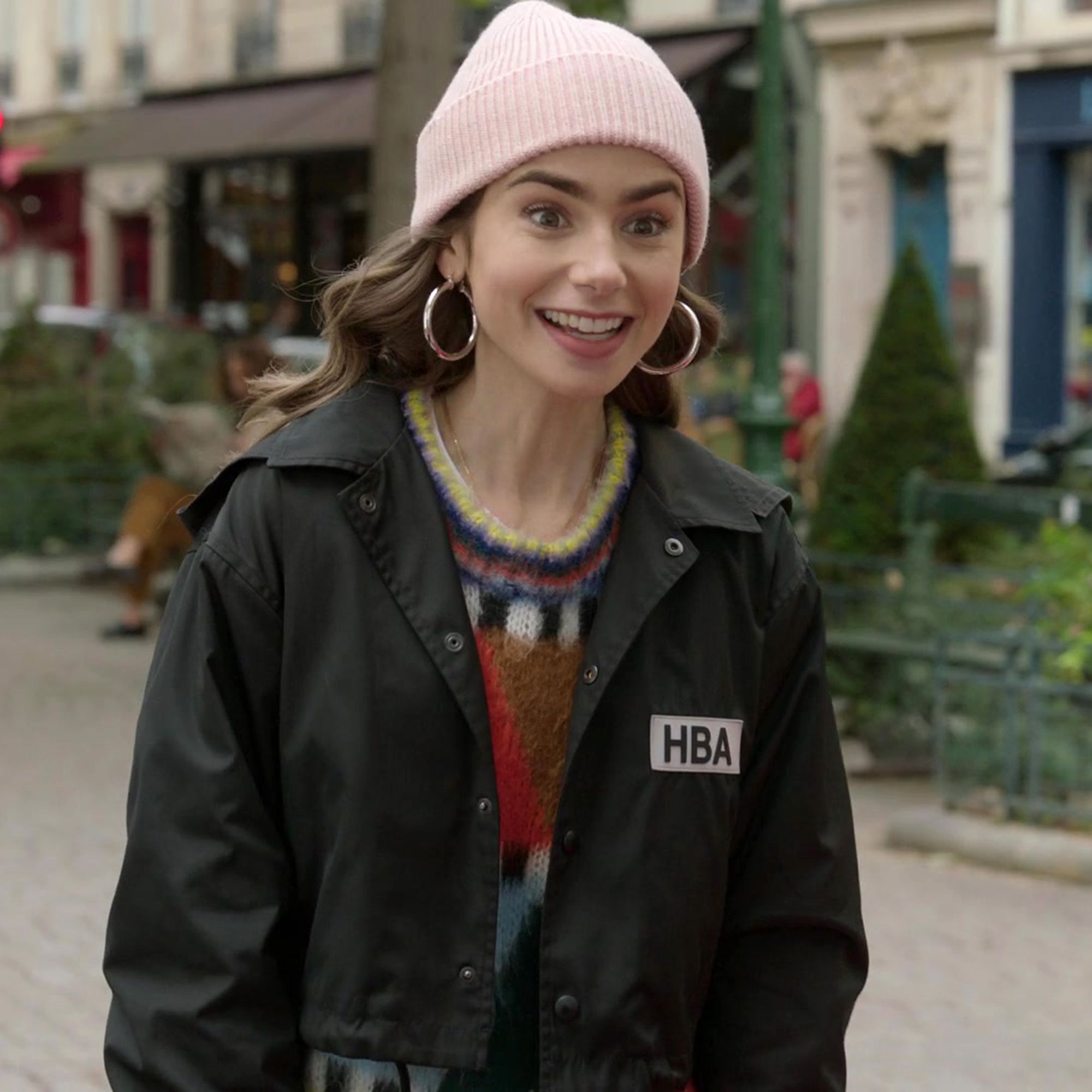 So Emily is off to Camille’s family château along with Camille’s boyfriend, who Emily has kissed knowing they’re together at this point. Questionable morals aside, our girl from Chicago kinda kills her countryside weekend look. This romantic, ruffled white blouse paired with a red tartan Vivienne Westwood cropped jacket is a serve, and I’m here for the fantasy. The only thorn in my side this episode is the nagging question: How did this ringarde Caucasian woman from Chicago with a penchant for Chanel and Eiffel Tower bag charms end up with HOOD BY AIR in her wardrobe rotation? 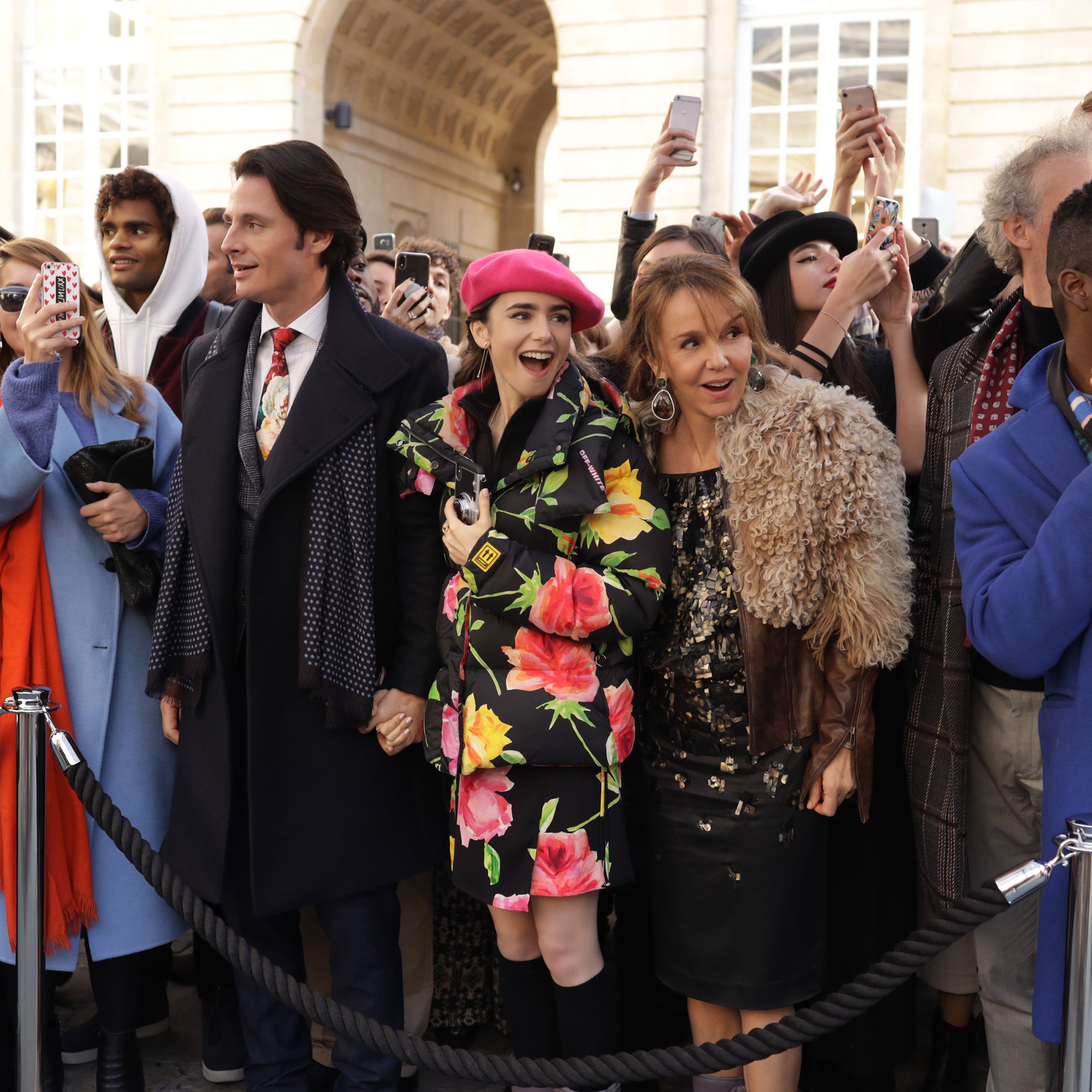 My confusion continues in the chaotic season finale with Emily in not one but two OFF-WHITE looks. The puffer coat-and-hot pink beret combo caused me to throw my hands up in the air exclaiming, mon dieu. Off-White feels particularly off brand for Emily, but then again, Emily has no distinguishable brand. 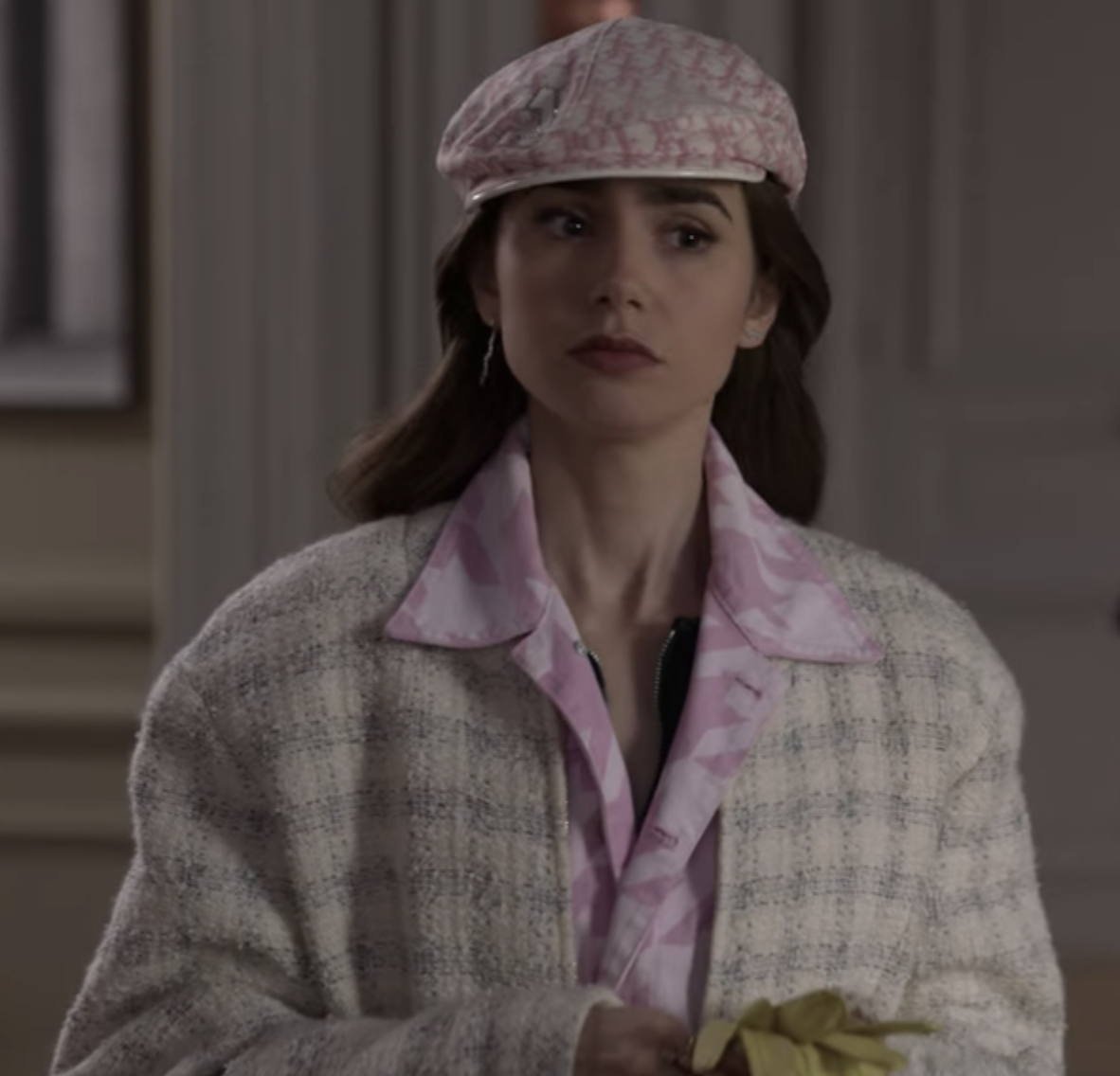 We finish off with dessert, a look so saccharine it gave me diabetes. Emily wears a matching houndstooth jacket and skirt from Chiara Ferragni that had me thinking this could be a fashion redemption story, but then she adds in a Diorissimo newsboy cap, a green tweed jacket, green leather gloves, and a BLACK? Kate Spade bucket bag for absolute chaos. Which is precisely the point.