Diamond cutters do a lot more than just create the shape of a diamond, making it round or oval, square or rectangular, even a pear shape.

Their work determines the amount of brilliance and fire — technical terms in the trade — that the gemstone produces. And those qualities have changed throughout history as tastes shifted and technology improved.

“The pearl is the only gem that doesn’t require human intervention,” said Alessandro Borruso, deputy director of Sotheby’s Diamonds Europe. The diamond, for example, “looks pretty much like a piece of frosted glass in its rough state.”

And they were used that way as early as the fourth century B.C. “We have examples of rough diamonds set in rings dating back to the Romans,” Mr. Borruso said. “Diamonds were celebrated for their distinctive powerful luster and indestructible nature, which was believed to be passed on to the owner.” 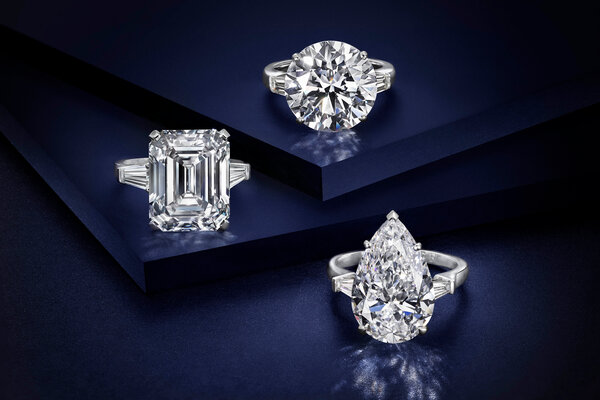 During most of the Middle Ages, the structure of a diamond was known to be an octahedron, like two pyramids joined bottom-to-bottom.

In the 15th century, the point cut — regarded by many as the first diamond cut because it required human skill — was developed. With it, “the wonderful journey of light began,” Mr. Borruso said, “and cutting became a skillful artisanry.”

(For much of the West, the story of gem cutting has been colored by European colonial ambitions and the dominance of Antwerp, Belgium, as the cutting center since the mid-1400s. But for centuries India and regions in the Middle East also have had flourishing gem industries.)

From the European standpoint, mines were developed as diamonds were discovered — notably in Brazil in the 1700s and South Africa in the 1800s. And its focus on industrial improvements in those same centuries included the development of new machinery to process the stones.

More diamonds, new machines, advances in cutting — the developments all combined to create diamonds that suited the times.

“In the opulent Baroque period of the 1700s people were going to balls in ballrooms lit by chandeliers overhead,” said Al Gilbertson, manager of cut research at the Gemological Institute of America in Carlsbad, Colo. The flickering candlelight bought out the fire, the flashes of color, in cut gemstones and they became even more popular for evening wear among the wealthy.

But could fakes be far behind? “A Parisian jeweler put metal on the back of glass, causing the imitation to sparkle,” said Mr. Gilbertson, who also is the author of “American Cut, The First 100 Years.” “So there was a big push in the 1700s to create new kinds of cuts to make diamonds more sparkling. There were hundreds of different attempts; they were trying everything.”

Out of that explosion of experimentation came myriad cuts. Mr. Gilbertson’s descriptions include: the rose cut, with a faceted domed top, flat base and a circular outline; the modern cushion cut, square or rectangular and with sides that bow outward; the old mine cut, also square or rectangular but with very deep cuts, at least by modern standards; and the modern round brilliant, the look that most people think of when they think of a diamond.

As each style came into fashion, some wealthy owners had their old diamonds reshaped. (Prince Albert even had the Koh-I-Noor recut, reducing it to a little less than 109 carats but producing an oval brilliant cut that was widely praised.)

The spread of incandescent light through the 1900s also changed cutters’ approaches, because electric light brings out the brilliance, or sparkle, of gems. But it is modern technology that has dramatically changed both the process of cutting gemstones and the end results.

Pieter Bombeke, who has been cutting diamonds in Antwerp since 1967, said a division of the Antwerp World Diamond Center has developed optical equipment that magnifies facets up to 50 times, “so you can see if the position of the angle is correct.” When he began his career, the best magnification was no more than eight times the view, he said.

Computers have contributed, too. Today, Mr. Gilbertson of the gemological institute said, there is “a scanner that can look at a rough diamond and produce suggestions for getting the most value out of it by working around the flaws to get real nice stones. And there are automated, computer-driven cutting machines programmed to cut better diamonds.”

But Mr. Bombeke stresses that experience can sometimes outshine technology. “It’s not a matter of the number of facets to get more shine,” he said, “but a matter of positions, angles and interaction between bottom, side and the crown.

“I proved that with a special cut,” he continued. “A brilliant cut has 57 facets. I made something with 43 facets that was just as brilliant because I put the angles and positions of the facets in a way that they reflect more light than the brilliant. I call it my ‘Basket of Light.’” (The name pays homage to a 1969 album by the English folk rock group Pentangle.)

New artisans are being trained to carry on the skill. While Antwerp continues to be the cutting center, other areas are developing their own expertise.

For example, André Messika Diamonds in Namibia, a facility where De Beers sends some of its rough diamonds to be cut, recruits employees with disabilities.

The facility “is fully adapted to wheelchair users and people who are deaf,” said Lisa Levinson, head of marketing and communications for the National Diamond Council in Britain. “It took the company two years to develop the necessary expertise, where they taught a sign language interpreter how to cut diamonds so she could teach the first cohort of recruits. They modified a minibus that would support the wheelchair users’ commute to work each day.”

So, what is the most popular cut today?

François Graff, chief executive of the company that bears his family name — and has worked on some of the world’s largest diamonds, replied by email: “With its timeless silhouette and incomparable fire and brilliance, the round brilliant cut continues to be the most popular diamond shape today.”

(And he explained the back story: “In 1919, Marcel Tolkowsky calculated the exact angles and proportions that would dictate how the light enters a diamond’s facets to maximize the fire, brilliance and scintillation within. His design for an ideal cut round diamond was the precursor to today’s round brilliant cut.”)

Yet different countries have different preferences, said Oded Mansori, chief executive of HB Antwerp. With 85 master cutters, it is one of the largest diamond cutting businesses in the world.

When it comes to carat weight, “I could never sell something that ends with a four to a Chinese company because four means death,” he said, referring to the fact that the two words sound similar in Mandarin. “But I can sell 8.88 carats because 8 means luck.”

And, in cuts, “the pear shape sells all over the world,” he said. “The U.S. market prefers an emerald cut or square cut. The U.S. market will sacrifice purity for size.”

The opposite is true in the Asian market, Mr. Mansori said, “especially Japan, goes for purity of the stone and they will sacrifice size for it. The round cut fits into Japanese specifications.

“The Chinese want the softness of lines, which explains their preference for an oval shape,” he continued. “In the Chinese culture, there are no sharp edges.”

And it is skilled cutters that capture all those cultural nuances in the facets of a gem.