THE END is near for desperate Brits who have been cutting and dyeing their own hair in lockdown with varying degrees of success.

Hairdressers and barbers are allowed to open from April 12th with an end to our mane misery in sight. 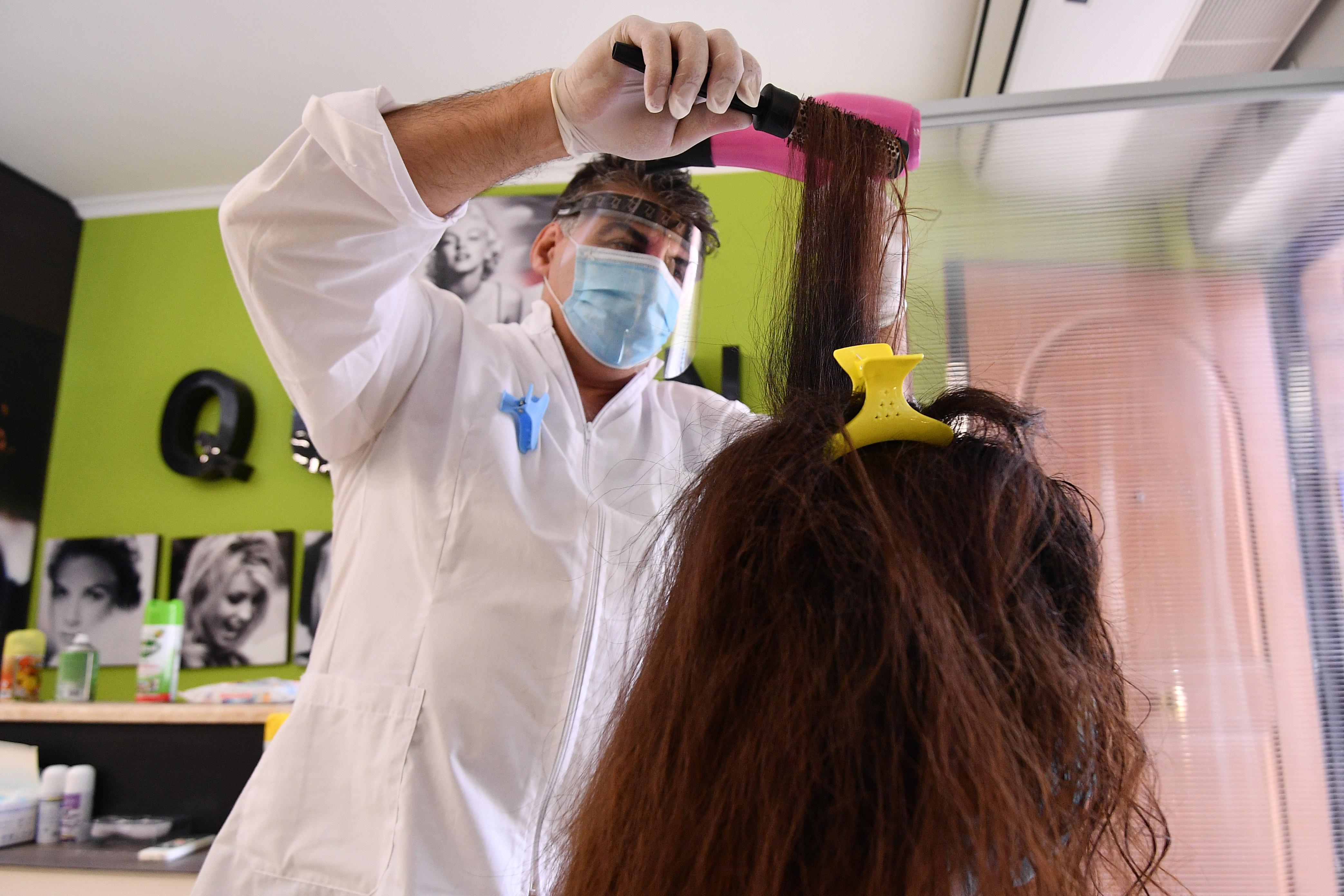 It comes as the PM told MPs in the House of Commons his plan yesterday to get the country back to normal after the huge success of Britain's speedy vaccine rollout.

So, what will have changed when salons open? Will you be able to get your favourite cut and colour? Will you have to wear a mask? Here’s everything you need to know before your first visit…

1. When will barbers and hairdressers open?

The Prime Minister's announcement confirmed that hairdressers and barbers can open from April 12th – provided they could make their premises Covid-19 secure.

Hairdressers and barbers are classed as "non essential" shops which is why they weren't allowed to open before.

All non-essential businesses have been been shut since January 4th, when Boris Johnson announced the third national lockdown – but those in Tier 4 areas have been shut for even longer.

The government's roadmap out of lockdown states "non-essential retail; personal care premises such as hairdressers, salons and close contact services; and indoor leisure facilities such as gyms and spas" will all be able to reopen from April 12.

Hairdressers were ordered to shut for four months in the March lockdown last year, and when they reopened, some salons offered extended trading times.

At the time, some stuck to their normal 9am-5pm hours, but others opened their doors as early as 4am and were working longer hours to get through their client list.

It's unknown if this will happen again, but it's worth contacting your salon to find out their opening hours.

In order to cope with demand following the last lockdown,the owner of Canterbury-based salon The Chair Katie Hancock told The Telegraph that she was planning to open from midnight until 4pm on July 4- the day salons were allowed to reopen – to cope with the backlog of clients.

She said: "Obviously the health and safety of our clients and stylists is the priority. All of our services will take a bit longer than usual."

2. Will my barber and hairdresser/I have to wear a mask?

New guidelines have not yet been confirmed, however, it’s likely all workers will be wearing gloves and a mask, which is the minimum requirement suggested by the British Beauty Council.

Following the first national lockdown, many salons introduced perspex screens above the basins and between working stations, which are likely to stay this time around.

It’s not thought customers will be forced to wear masks, although – as last time – you can if you choose.

Some salons may wish to check the temperature of customers coming in, with London salon owner Gennaro Dell'Aquila saying she did this last time around.

At the time, she said: "When the customer comes in we will measure their temperature with a scanner and antibacterial gel will be offered along with two face masks (in case one gets dirty).

"Our staff will also wear a mask and gloves and be have their temperature measured 3 to 5 times per day." 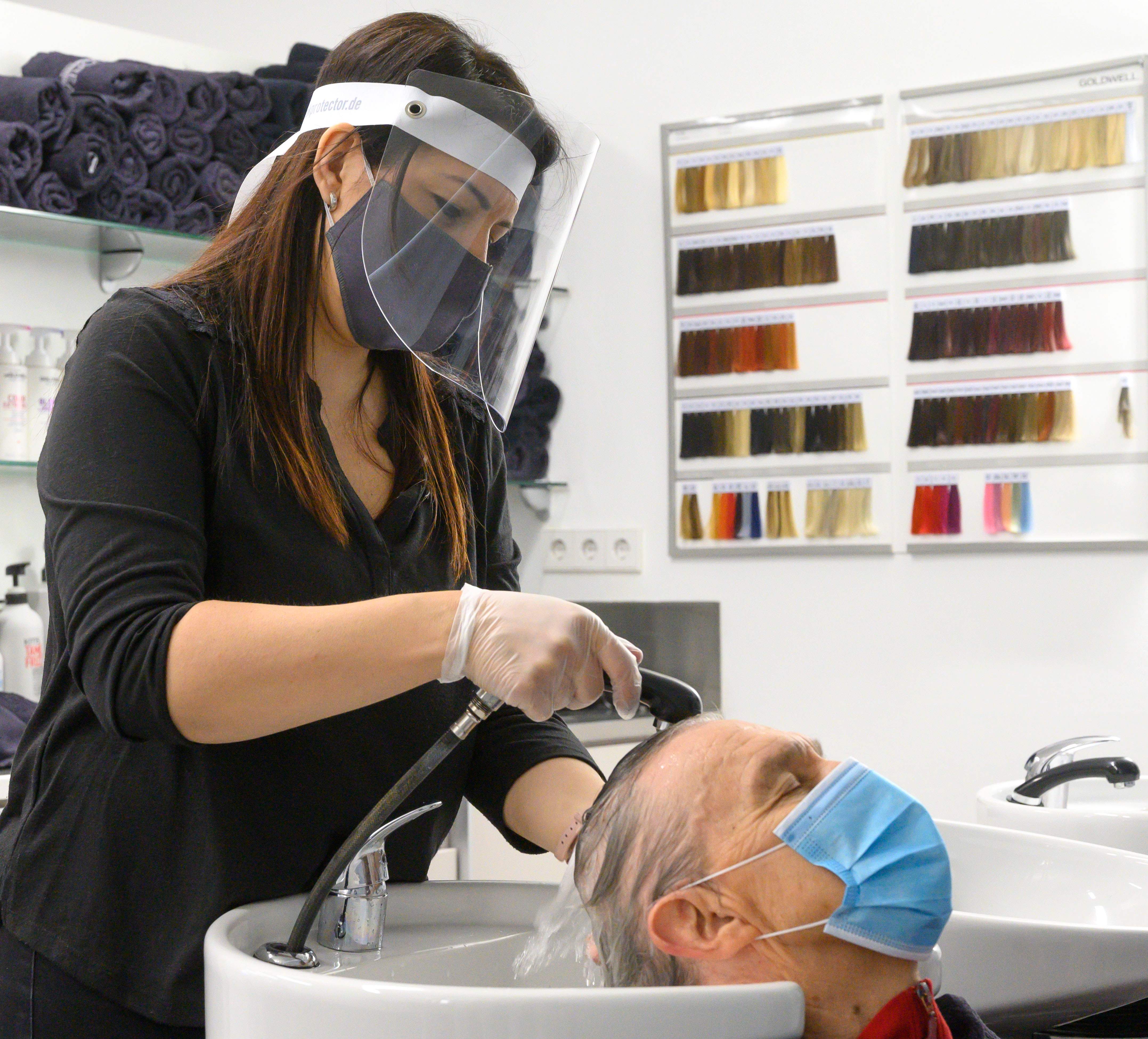 When salons reopened in July last year, they were forced to overhaul their treatments to comply with new measures.

For example, in some places blow-dries were not offered as hairdryers blast particles around the room, which could potentially compromise the entire salon.

It has not been confirmed if blow-dries will be allowed once more, however, it's likely, at least for now, the measures will remain the same.

Kat De Rozario, hair stylist at Josh Wood Atelier, previously told Stylist: "Due to the potential risk of the virus being transmitted through swift airflow and to reduce the time and volume of people in salons, what is apparent is the need to cut down, or out, blow drying the hair.

"Essentially, whether hair is long or short, the cut needs to aid styling so it can dry naturally without the need for a blow dry."

4. How will social distancing work in the salon?

You’ll likely go straight to your chair for your appointment and straight back out again to limit the time spent inside.

In order to comply with social distancing, some salons may have a limit on how many customers can be inside at any one time, or have a quota for each day – so it's best to check with you hair salon.

And chairs are likely to be more spaced out than before the first lockdown with many salons already implementing this rule before being thrown into lockdown in January.

Hairdressers and barbers may also extend their opening hours as a way around this to try and see as many customers as possible, and staff may work rotas to minimise contact between them.

"We have started a waiting list that has 100s of bookings already," says Gennaro.

"These will be appointments only and every salon, depending on the number of chairs, will make sure we have only the allowed amount of customers booked in at one time."

5. Will I still be able to enjoy a coffee and a magazine?

Sadly a cup of tea or coffee and a magazine is probably still out of the question – customers may even be asked to leave their belongings in a locker. 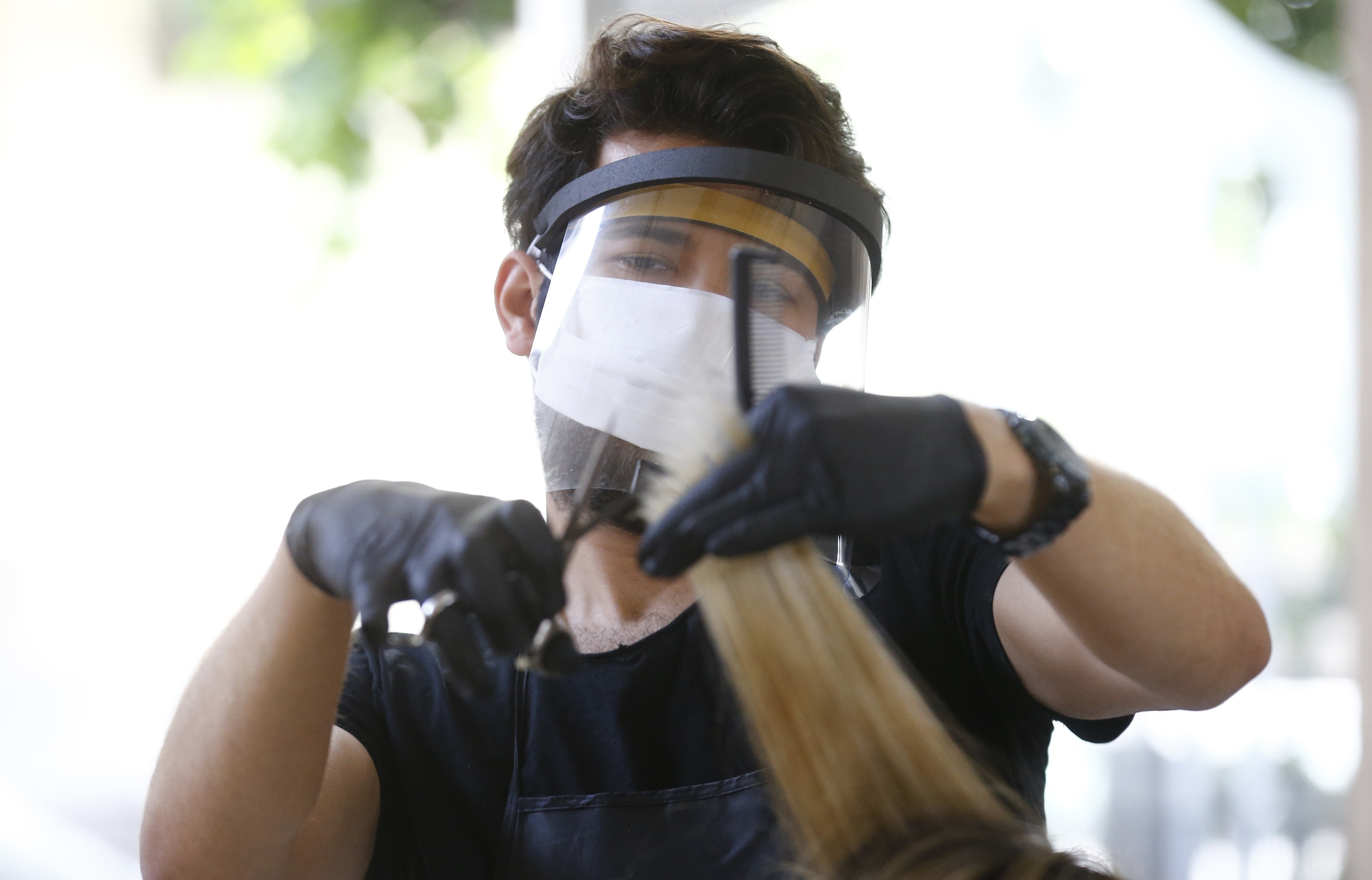 6. Will I have to do anything before an appointment?

Before being seen, it’s likely any potential customers will be asked to fill out a lengthy questionnaire, as before.

This would probably ask them about their health and well-being, and possibly their movements or interactions over the last seven days to ensure they don't have covid symptoms.

You may be asked to wash your hair before your appointment to cut down on how long you spend in the salon.

7. Can I still get the other treatments?

Depending on social distancing measures, extras like a head massage or even a shampoo and condition could be scrapped to comply with new rules.

Rather than spending hours waiting for your dye to develop in the salon, hairdressers will apply the tint and give customers a timer for when they can remove it at home.

However, all salons will defer, so again, check with yours and see what they offer.

8. Will a haircut cost more?

As workers will need to buy and wear PPE (Personal Protective Equipment), this cost could be passed on to the customer, something Gennaro says is inevitable.

"Prices will go up because we have been working on improving everything over these months to fight the crisis.

"Also with the new PPE equipment needed and sterilisation for things like brushes and scissors, prices have to increase to reflect that."

However, prices may have gone up following the last lockdown, and may or may not rise again – but ask about prices ahead of your appointment.

Some salons could also implement a 'no cash' rule which will include tips – instead, customers will be asked to pay with card to reduce contact.

Whether or not you can walk in or will be told to join a waiting list will vary from salon to salon.

But considering the increased demand for their services and the social distancing measures they have to put in place, it's highly likely that you'll have to join one before you can go in for your cut and colour.

Speaking to the Daily Mail, celebrity hair stylist Michael Van Clarke revealed his Soho salon had a 3,000 waitlist for when they re-opened in July – and it's likely many will have the same now.

To cope with demand, hairdressers won't be fitting new hair extensions and the day will be split into two shifts – in doing this, Michael hopes they can see all the clients on the waitlist within three weeks of re-opening.

To reduce the number of people coming into the salon, customers will be expected to book their appointments either over the phone or online.

If you are desperate for a fresh trim then here are plenty of tips on how to cut men's hair with clippers.

Or, if you fancy attempting to cut your own bangs – here are some tips on cutting your fringe at home.

Plus we revealed the Queen has been styling her own hair at Windsor Castle during lockdown.