Lucy Mills Hochman and Adam Allen Gillenwater’s love is a battlefield. A historical battlefield, that is.

Ms. Hochman and Mr. Gillenwater, both 31, met in the fall of 2015 working for the American Battlefield Trust, a nonprofit organization focused on the restoration of battlefields from the Civil War, the War of 1812 and the Revolutionary War.

It wasn’t until a year after they met that they became friends. Both wanted to prove their professionalism, so they remained reserved toward one another. “I was unsure that I would even make any friends at the job, let alone find a partner,” Ms. Hochman said.

In early 2017, Mr. Gillenwater finally worked up the courage to ask her out for drinks after working late on a project together. Still conscious of not wanting to ruin the friendship, he taught her how to play the card game Rummy 500 and the two talked until after midnight. “I knew before we ever started even fake dating that I wanted to marry him,” Ms. Hochman said.

From there, they went on many “quasi-dates” as they developed feelings for each other. “We did it under the pretense of continuing that card game we had started that first night,” Mr. Gillenwater said.

The pair’s love only grew from there. “It became pretty apparent to both of us that it was something that was real,” Mr. Gillenwater said.

In the summer of 2020, the couple moved to Charlottesville, Va., where Mr. Gillenwater now works as a senior policy manager and field representative at the Piedmont Environmental Council, a nonprofit group that protects Virginia’s rural economy. Ms. Hochman is pursuing an M.B.A. at the University of Virginia’s Darden School of Business. She graduated from Skidmore College and Mr. Gillenwater graduated from the University of Virginia. He also has a master’s degree from the university’s Frank Batten School of Public Policy.

Shortly after their move, Mr. Gillenwater got down on one knee by their dining room table and proposed. He said “the timing felt right to me.” 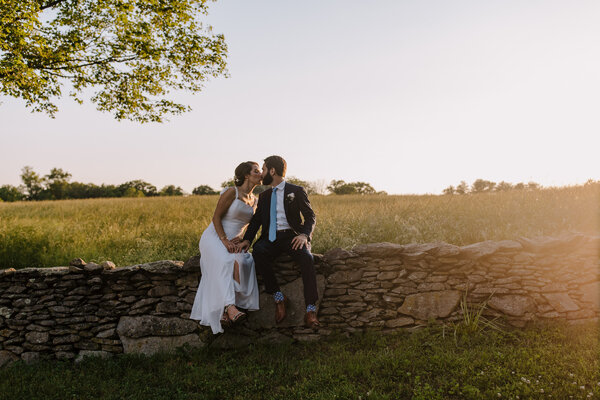 “You want to make sure that this person is someone you want to have as a lifelong partner and who’s committed to building that loving partnership,” Mr. Gillenwater said, “and it didn’t take me long to figure out that that was Lucy for me.”

While the proposal was not extravagant, Mr. Gillenwater wanted it to be a surprise. “He would sleep with a piece of dental floss next to the bed and try to measure my finger while I was sleeping,” Ms. Hochman said. “He took one of the rings I had and pushed it into a block of cheese to get a mold of my finger size for the ring. And then he took all these photos of me using my phone and used this app to try to scale how big my fingers were compared to the model of iPhone that I had.”

The couple married June 4, 2021 at Ciao Bella Celebrations, a private wedding chapel in Warrenton, Va. Mona McLinden, an owner of the chapel, authorized by the state of Virginia, was the officiant. “I really didn’t want to plan a big wedding and then just be disappointed and have to cancel or reduce,” Ms. Hochman said.

A celebration on June 5 at Mortgage Hall Estate in Middleburg, Va. was led by the bride’s brother, Jesse Bradley, a lead pastor at Grace Community Church in Auburn, Wash. , and attended by 20 family members.