In November 2012, Linda Zang was on her way to her first date with Patricia Marie Reville at Kitchen Zinc, a pizza restaurant in New Haven, Conn. They had matched on the dating website OkCupid, and Ms. Zang, who was a law student at Yale at the time, picked out the restaurant for their first date. There was only one problem — Ms. Reville, who goes by Tricia, had just let her know that she was at the wrong restaurant.

Ms. Zang quickly made her way to Kitchen Zinc’s fancier sister restaurant, and spotted Ms. Reville waiting. The mistake didn’t damper their chemistry — after introducing themselves, they fell into an easy banter, debating the merits of professional sports and talking about Ms. Zang’s summer working at the Maryland Attorney General’s Office.

“She just seemed very smart and very fun,” said Ms. Reville, 32, who is an associate at Debevoise & Plimpton in New York. “And fortunately for me, all of that was totally true.”

They began dating, and spent the next five years supporting one another through career and life changes.

“We’ve been together in this kind of growth period in people’s lives, when you kind of watch each other grow up, and grow into the person that they are today,” said Ms. Zang, also 32, who is an associate at the law firm Cleary Gottlieb Steen & Hamilton in New York.

In June 2017, they went on a picnic in Central Park, where Ms. Reville surprised Ms. Zang by proposing in front of a group of their friends.

“She really is my biggest cheerleader,” said Ms. Reville, 32. “She really is the funniest person that I know, and I just, I really love her.” 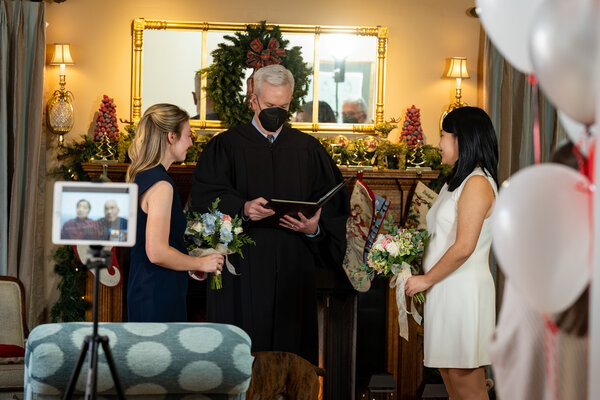 In August 2017 the couple moved into an apartment together in Brooklyn, and Ms. Reville started law school at Columbia. She was expecting to take the bar exam in July 2020, so they began planning an 100-person wedding the following month at OceanCliff, a wedding venue in Newport, R.I. Like many life events last year, it did not go as planned.

“We knew pretty early on with Covid that we were going to have to reschedule,” Ms. Reville said.

Instead, the couple planned a much smaller ceremony for them and their immediate family.

“One of the things that was really nice about it,” Ms. Zang said, “is it really, really stripped away all of the other stuff.”

The couple coordinated with Ms. Zang’s parents in Maryland, who would watch the ceremony remotely. Then had a realization — Ms. Zang’s grandmother, who raised Ms. Zang in Nanjing, China, until she was six years old, could watch remotely as well.

“We had not expected that her grandmother or grandparents would be able to travel for the wedding in Rhode Island, but I don’t think it would have even occurred to us to try and set up a Zoom or something if Covid hadn’t happened,” Ms. Reville said. “In some ways, there was a bit of a silver lining with that, because it was really wonderful having them be able to participate.”

Ms. Zang’s grandmother, Yu Yongxian, woke up at 3:30 in the morning, local time, to to watch the wedding with a few of Ms. Zang’s relatives.

“She was so happy for us, and so excited to be able to be part of it,” Ms. Zang said. “It probably was one of the most moving aspects of having the smaller ceremony, being able to have my grandmother present with us over Zoom.”

The couple was married Dec. 19 in the living room of Catherine Thorpe and Mark Melsenti, Ms. Reville’s mother and stepfather, in Stamford, Conn. About 10 family members watched in person as Justice Andrew McDonald, of the Connecticut Supreme Court, officiated.

Both Ms. Zang and Ms. Reville had been active in the fight for marriage equality, and being able to get married, on their terms, is something they savored.

“We were able to get married completely on our own schedule,” Ms. Reville said. “Yes, there were complications with Covid, but it really was about us and our timeline.”