Annie Burns and Allie Fleder celebrated their marriage near an abandoned carousel in Asbury Park, N.J. 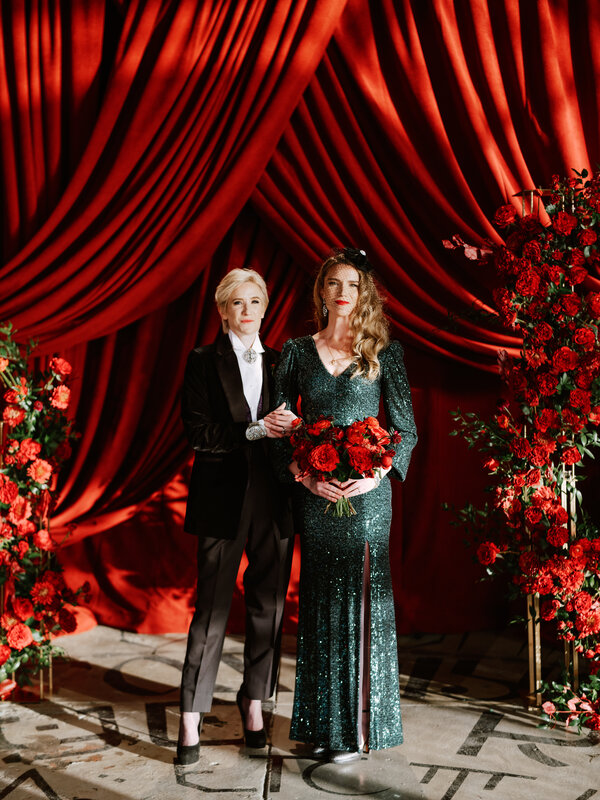 It was love at first voice for Annie Burns. In years past, when she imagined her future wife, she would hear a distinctive voice in her head saying her name. And when she actually heard Allie Fleder speak, there was something about her loud, boisterous laugh that was friendly, warm, and trusting. “I felt as if I had known her forever,” said Ms. Burns, 34, a freelance digital content producer and graduate of Boston University. “I wanted to keep hearing her voice. I wanted her to sing to me, speak to me, and tell me stories for the rest of my life.”

Allie Fleder and Annie Burns met in 2013 at Metropolitan, a gay bar in Williamsburg, Brooklyn. They were with friends who left without them. “So there I was playing pool with Annie, who looked like a model and towered over me,” said Ms. Fleder, 33, the chief operating officer of SimplyWise, a start-up company that helps people save for retirement, and a graduate of Columbia and the London Business School. “I assumed she was so far out of my league that we could never be anything more than friends, which is why I was shocked when I woke up the next morning to about 30 texts from Annie, asking me out.”

Although Ms. Fleder’s first thought was that she should stay far away, she eventually responded to the texts. “When it comes to Annie, you have to throw out boring things like practicality and ‘shoulds’ and the expected,” Ms. Fleder said in an email. “Nothing about life with her is commonplace. In fact, it’s fireworks. It’s buying expensive champagne when you’re broke to wildly celebrate nothing except that it’s Tuesday.”

On their first date, they learned each was a Scorpio. “When we looked up the compatibility of two Scorpios,” Ms. Burns said, “we saw skull and crossbones signs everywhere. Every blog said “Stay far away. It’s a fiery passion and a fiery death.”

So, after dating for one year, they broke up. “When we weren’t having the time of our lives, we were busy having huge fights over relatively small things,” Ms. Fleder said.

Ms. Burns was devastated. She blocked Allie on all devices. “I thought I would never love again and told myself to never ever give myself and my whole heart to anyone.”

But after a few months, Ms. Fleder told her she had been miserable and thought of her every single day. “I told her my heart would never heal,” Ms. Burns said, “but she refused to listen.”

“I told myself ‘no no no’ for a few months — but she would not give up,” Ms. Burns added. “She said she would never want to live in this world without me and asked if we could move in together. And finally, we did.”

In June 2015, they moved into a sunny walk-up in Little Italy, and two years later, Ms. Fleder took Ms. Burns on a trip to Mexico and proposed. Several months after that, she got a full scholarship to the London Business School, so they moved to London. Ms. Fleder started Sherpa, a luggage delivery service, which was sold to My Bag Check, a New York company, at the end of 2019 and they moved back to Manhattan. “We were so excited to make our home once more in our favorite city on earth.”

Ms. Burns proposed back in Asbury Park, N.J., outside an abandoned carousel. The building was created by the designers of Grand Central Terminal in New York.

Because they were spending the summer at their condo in Vail, Colo., during the pandemic, they went to the Clerk and Recorder’s Office in Eagle County, Colo., to get their marriage license. The marriage certificate was signed by Julie A. Salaz, deputy clerk on Sept. 10, which is the date of their legal marriage. But the couple agreed to not celebrate that and “not remember the date” so that our elopement in Asbury Park would be the date to remember.

They celebrated Nov. 20, 2020, at the abandoned Asbury Park carousel. It was just the two of them, a trio of jazz musicians and a photographer. Although they had their legal marriage separately, for this personal ceremony, they wrote their own script and married themselves.

“We never thought we’d elope, let alone during a pandemic,” Ms. Burns said. “We truly wish that the people who have shaped us could have been there,” Ms. Fleder added. “But these last nine months have underlined what we always knew. When you’re lucky enough to have people you love madly, hold them close. And when you’re lucky enough to have something to celebrate, do it now.”